My husband and I have stayed in a number of Michigan State Park rental cabins over the past 15 years or so, which you can read about here. And last weekend, we stayed in the one we both agreed was our favorite one out of all of those – the cabin named 14 Foot Shoals at Cheboygan State Park. It is so named for one of the shoal lights visible from the beach just steps away from the cabin, which are now used to guide sailors instead of a standard lighthouse. Shortly after arriving, we took a walk to see the ruins of the former Cheboygan Point Lighthouse, built in 1859 and abandoned in 1930, read more about that here. 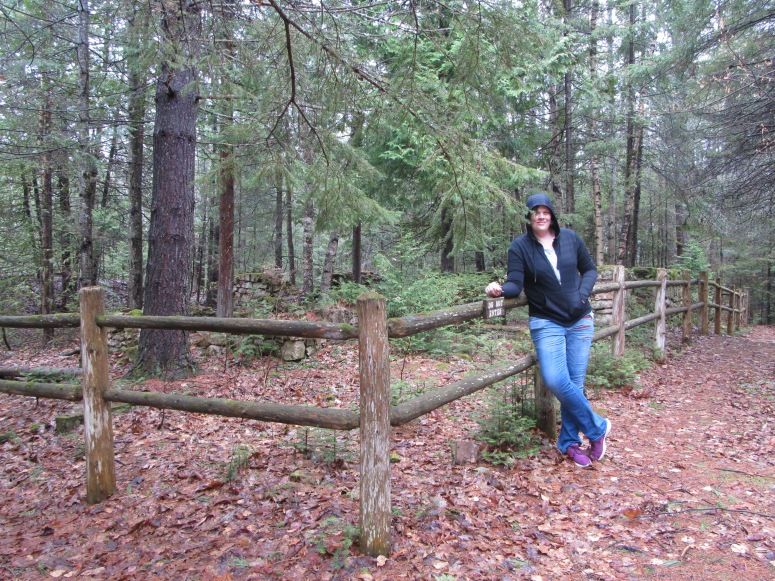 Me at the Cheboygan Point Lighthouse ruins site, which is fenced off with a “do not enter” sign.

It was kind of cold and damp the first night we arrived, so we opted to not build a fire outdoors, and instead decided to push some comfy chairs near the cozy, cozy woodstove. It took Mike a couple of tries to get the fire going without it going out, and the smoke alarm went off a couple of times. Always the MacGyver, I solved that little “problem” by duct taping some paper towels over the smoke detector. Now it was time to enjoy the warm fire and some ice-cold drinks! 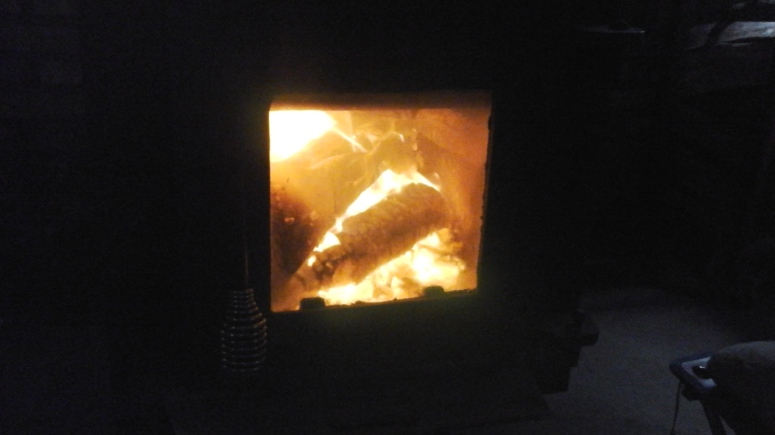 Mmmm…fire! Camp stove wood was provided, and if you wanted to split it up, you could use a “wood maul.” Read another blog about that here.

Separating this lovely, secluded cabin from the rest of the world was a seasonal road, which Michiganians commonly refer to as a “two-track.” And further separating us was a locked gate, which assured us we would have very few other humans disturbing us on our little wedding anniversary retreat! This “two-track” was about a mile long, though we babied our Chevy Malibu by taking it kind of slow…what better way to take in the lovely wooded scenery?

This “two-track” was the only direct vehicular route to our cabin and the neighboring Lighthouse Point cabin.

The cold dampness that kept us indoors the first night made itself scarce the next day. When I woke up the next morning, I had a sweet private beach where I could enjoy my “jams” and indulge in one of my favorite pastimes – staring at the water, while my husband  enjoyed catching up on “beauty sleep.”  With the Mackinac Bridge and Bois Blanc Island within view – and lots of boat traffic, there was plenty to watch on the “Huron TV Channel.”

Bye bye, freighter! It was nice to see you!  Bois Blanc Island is in the background, ferries from Cheboygan’s marina will take visitors to this island. To the right is a close view of 14 Foot Shoal light. 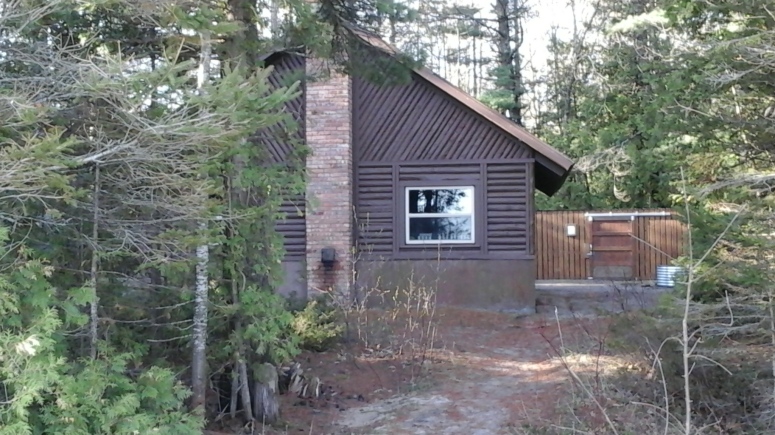 Rear view from beach, some bear poop is visible in front of the chimney near the trail. Not visible is a huge pile of it about the size of a bowling ball. We told the rangers about it before we left. 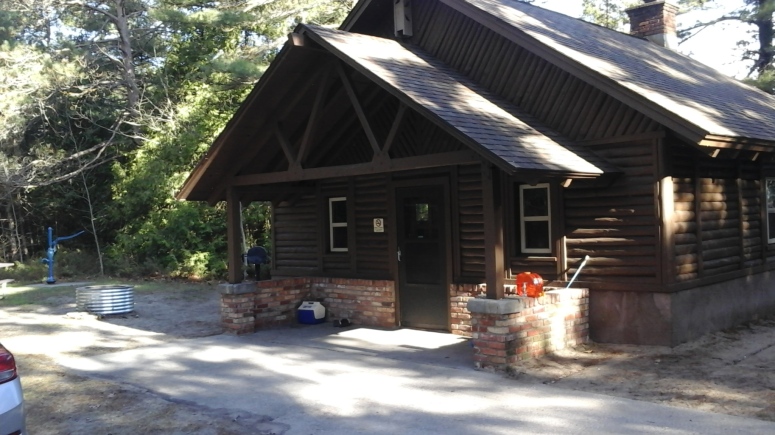 On our last night at the cabin, we decided that we were going to do something we’ve never been able to do on any of our other cabin/camping trips. And that would be to have a fire on the beach!

My husband attempting to look “heroic”

That beach made me very, very happy!

Looks like a license plate design, doesn’t it? We could see the “Big Mac” from the beach and could NOT get enough of it!

Our last morning, Michigan weather decided not to be a feisty bitch, and it was warm enough to wear shorts. So after we handed in our gate key at the park headquarters, we went down to Cheboygan State Park’s public beach, which overlooks Duncan Bay – and the Mackinac Bridge.

The public beach has a nice picnic pavilion, which we used a couple of years ago during a rain storm as a place to stay dry while getting drunk (oh the irony)! 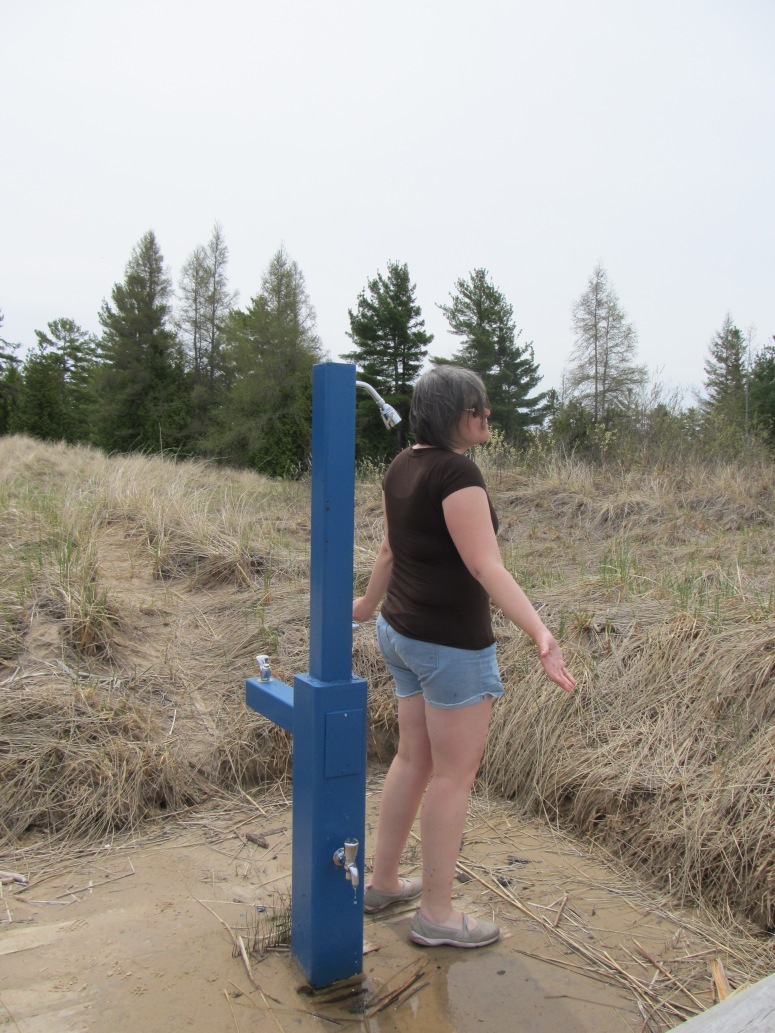 The beach also has a shower, too. Don’t get me started on the inadequacy of public showers for tall folks! If you want the back of your neck or your chest super clean you are all set! Mental note – add this photo into my blog about being freaky tall

Goodbye, Cheboygan State Park! We’ll try to come back to see you soon (as long as it’s not summer when it’s buggy AF, lol…)