I work in “Retailville.” I will not disclose the name of the company for which I work publicly because of privacy agreements I have signed, but I will say that it is a department store. That is all!

As a “perk” to its employees, I received a coupon redeemable for in-store or online discounts while I was working in Hell (aka Black Thursday/Black Friday weekend). I redeemed said coupon on a day off by buying a couple of sheet sets, some underwear for my husband, some underwear/bras for myself, and a new pair of shoes for myself. I have a “stand on my feet all day” job, so I do have to invest in good shoes every few months or so. I think I scored a pretty good deal on the Nike shoes by getting them for about $30 (Nike products don’t get coupon discounts but I did get my employee discount – the “retail” price of the shoes is $65). I’ve never tried Nike shoes for my “stand on my feet all day job” so I don’t know if they’ll work or not, but…I like that they’re really flexible – and I like the color! They have not yet arrived so I can’t share a picture at the moment (they are kind of a seafoam green color).

As for my underwear? Well, I ran into a bit of a…problem. I was trying to buy seven pairs on a “multiple item discount.” This means each pair would be $4 (not including my employee discount) – if I bought seven pairs. The problem was that one of the styles I ordered was on clearance (for about $1.79 per pair), so all of the other pairs defaulted to…regular price. The horror! Paying regular price for underwear? What would Bill and Ted have to say about that?

So I did another order, and plan to return the “expensive” panties after they all arrive. And I ordered MORE pairs of the “discounted” panties! Retail winning? We’ll see! If the shoes don’t work out, I’ll have to return those, and if the sheets don’t fit our mattress, I’ll have to return those, too (though I opened one of the packages of sheets and I can kind of tell they’re going to fit). My husband looked at the model of the guy on his underwear “package” (heh…I said “package”) and decided that his underwear will be fine. Now I can throw away some of the more “questionable” pairs he has next time I do laundry (oh the power)!

On an unrelated note, he tried telling me in the bar a couple of nights ago that men’s underwear are less complicated than women’s underwear. Au contraire, mon frère! I think I won the argument by asking if he could describe the difference between a “midway” brief for men – and a “trunk” brief for men. He…could not. 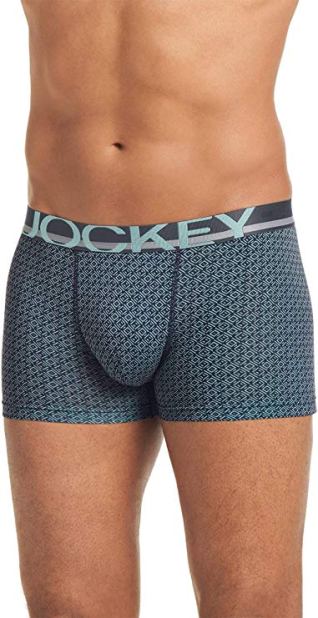 Men have almost as many choices with their underpants as women do. And men are just as picky about their underwear as women are.  There are tighty whitie men, boxer shorts men, boxer briefs men, and…bikini briefs men!  Men who work in exotic dancing clubs might even wear thongs! Trust me, I’ve waited on all manner of male customers wanting to buy their…underthings – and I’ve handled enough men’s underwear to make you cringe (packaged/new underwear – get your minds out of the gutters, people)!

As for women’s underwear, if you mention the word “boykini” to a typical man, I’m willing to bet he’ll get confused (and maybe a bit turned on, LOL)! I “think” it’s a hybrid of a bikini and a boyshort…Here’s an example:

A “boykini” brief… ↑ Below is an image of my “Thor” panties (more about those in a bit)!

Discount panty safari? Here’s a pair of the “closeout” “Thor’ panties I bought! No, they’re not sexy or anything, but…they’re cheap!

I’m jokingly calling the “discounted” panties I ordered my “Thor” underwear because they have lightning bolts on them! Well, he is the God of Thunder! And since the lightning bolts are multicolored, it will be easy to match my panties to my bra (not that doing so is a huge concern for me, LOL)! #notaslavetofashion

Hm, what kind of underwear does the God of Thunder wear? I honestly don’t care, though I did enjoy seeing Chris Hemsworth in his underwear in Men in Black International (LOL)!

Maybe underpants, underthings, shoes and bed sheets weren’t the most “exciting” things we could’ve ordered with my “employee perks” coupon. But these are all things we needed! And really…what could be more exciting than thunderbolt panties?