My husband and I are chillin’ and watching the 2013 remake of Evil Dead. And he just hit on some gems of golden wisdom. I started to take dictation (trigger warning – explicit language): 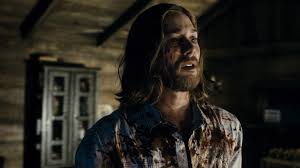 You know why people in horror movies are so dumb? Because they’ve never played Dungeons and Dragons.

And, apparently Dungeons and Dragons players learned their “survival” skills from the most heinous villains of all – Dungeon Masters (abbreviated as DMs).

DMs will want to fuck with you. Every DM wants to find a way to screw over the characters. They’re gonna fuck with you no matter what. Don’t do any stupid shit. You see a little girl crouched down with her back to you and saying “Please help me?” What do you do? You stand at a distance – and tell her to turn around. She’s going to grow some claws and teeth – and bite you and kill you. If it happens in D&D, it will happen in a horror movie.

Just do the incantation right, don’t fuck it up, don’t change it, don’t think that you’re going to do some other happy-crappy stuff. If you see a bunch of blood on steps leading down into a creepy basement, don’t go down there. If you MUST go down there, lock it up, block it off, and deal with it in the morning.

If your only choices with possessed loved ones are to chop  them up, bury them alive or burn them – do one of those things. Don’t get sentimental. Don’t fuck up, don’t play games, and don’t listen to them.

Now maybe THAT would be an interesting premise for a horror film! Former Dungeons and Dragons nerd saves the day with a hapless group of people who walk into their own horror film!