Trying to play back-to-back virtual trivia games is NOT for the technologically inept! Here’s a photo showing my ineptitude via a facial expression (goofing off by myself in Zoom room with my camera): 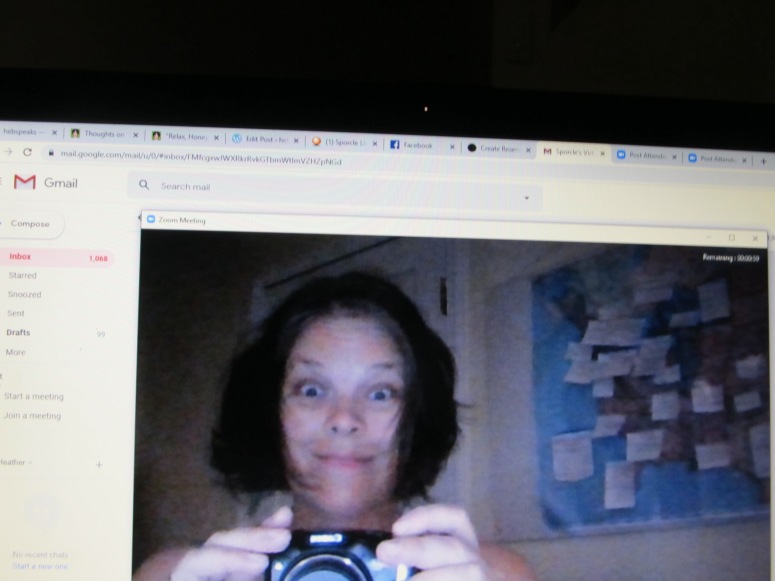 I signed up for an 8 p.m.  “all topics” trivia game Monday night, and was going to play a ’90s music trivia game right after that. Didn’t quite go as planned…the 8 p.m. game went a little long (partially my fault since my tablet didn’t want to let me sign in), and I sent the wrong meeting link for the ’90s music game to the friend I was going to play with. I had to leave the first game right before the final question was asked to straighten all of this out and send her the correct link – but I  had 56 points going into the final AND would have known the final. Figures you get a trivia question set mostly in your wheelhouse when you don’t get to finish the game!  Special thanks to trivia host “Robear” for spotting me that final question after the fact.

It was pretty much just me answering these questions, though my husband helped me with a martial arts question at the end of the round…

Sorry, I didn’t take a photo of the categories, so just the questions…

2. Mary Richards is the main character on what TV series, which aired from 1970 to 1977 and is named after it lead actress? Nerd point – this showed aired on what network? Got both.

3. Who is the only country artist to have reached #1 on the Billboard Hot 100 in the decade of the 2000s, doing so with a 2005 debut single that never appeared on any of her studio albums? Talked myself out of the correct answer (I blame myself)!

4. In a traditional Ironman Triathlon, put the three events in order based on the length of each leg, starting with the shortest.

5. Antanarivo is the capital of what African country, which is also the fourth-largest island in the world?

6. What nursery rhyme title character sat in the corner and said, “What a good boy am  I?”

7. What Mexican food with a name meaning “little meats” is made by braising or roasting pork?

8. What Dutch technology company gets its name from the shared last name of its founders, Gerard and Frederick, who started the company as a light bulb manufacturer? Clearly it’s been too long since I’ve shopped for light bulbs, and the light bulb that went on over my head when I tried to answer it was very, very dim (I overlooked an essential qualified to the question…totally my bad).

9. In the U.S., what unit of liquid measurement is equal to one-eighth of a gallon?

10. What traditional Japanese martial art has a name meaning “sword way” and uses bamboo swords called shinai in practice and competition? Thanks Mike for helping me with this one!

M1 – Director of A Very Murray Christmas and The Beguiled, among other films

M3 – Author who introduced characters named Peeta Mellark and Gale Hawthorne, among others in a trilogy of novels

Missed #1. Had the movie “Virgin Suicides” been one of the clues, I would’ve gotten it.

Of the elements of the periodic table that have full names that include an “S”, only three also end in a vowel. Name one of those three elements.

Didn’t get to answer this, but would’ve known at least one…

Unsure when I’ll be doing a trivia game next. As always, Go Pods, and stay classy, Bill Murray!