In our world, some people can’t wait to get out to barbers and salons to get their hair cut. Some people are also getting combative, violent and even murderous when asked to wear masks. In the 1989 “Batman” universe, people are afraid to go to the salons and use beauty products because Joker’s poisoned them. Also, the coolest people wear masks. Vicky Vale has to wear a mask or else she dies from the poison gas Joker has released in the museum. I think I want to live in the Batman world instead of this one. The masks are way cooler…and the villains tend to be smart!

Sigh…in our “boring” world that is sadly lacking in vigilantes, we’re wearing masks right now to avoid catching – and spreading, COVID-19. We just got our masks in the mail yesterday…behold ⇓

I bought these from a web site that normally specializes in Lacross gear (Stringking). They are washable…I told my husband he has to talk like “Bane” when  he’s wearing his (more about Bane in a bit).

On a more positive note, I am LOVING the new “Harley Quinn” animated series on SyFy and DC Universe (streaming)!!! My husband and I have already watched season 1 several times over, and started digging into season two (which is in progress on DC Universe). You KNOW it’s love when you find a streaming service you both agree upon which isn’t Netflix! Kaley Cuoco is absolutely brilliant in the title role – I’ll bet she’s having more fun than she did playing Penny in “The Big Bang Theory!”

I’ve always enjoyed the Poison Ivy/Harley Quinn dynamic. Reminds me quite a bit of the dynamic I have with one of my longtime friends (I’m definitely the Poison Ivy, she’s the Harley Quinn).

Give this series a look if you haven’t already…it has a great ensemble cast (two former “Seinfeld” actors provide voices), great storyline, great dialogue, great humor and it’s definitely for adults only! The “f” word is used quite often! There are also references made to oral sex! This one is NOT for the kiddos!

It also kind of makes fun of itself a bit (whomever is doing the voice of Bane absolutely cracks me up every time). Alan Tudyk provides several voices, including Joker, Clay Face and many others….he is quite the voice talent! You might know him best as “Steve the Pirate” from Dodgeball: A True Underdog Story or for his role as “Wash” on “Serenity.” Or Sonny the Robot in I, Robot, or that one robot he did in that one forgettable “Star Wars” film that came out recently (pssst – all of those movies are forgettable to me)! 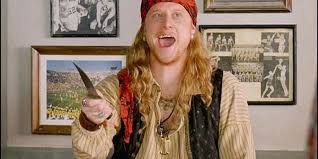 One thought on “In Other “Batman” Related News – Masks, Poisons, Risks of Death…And The New “Harley Quinn” Animated Series!”