March may have been akin to a disappointing child in terms of “meh” weather, ankle sprains, common colds, surly bosses and co-workers and phone mishaps – but in terms of TV shows? April looks like it won’t be a disappointment! Let’s take a look at three TV shows that might not make me grumpy about having to pay a cable bill!

What We Do In the Shadows (Premieres Wednesday, March 27, FX)

This series is based upon the cult movie released in 2014 (film cast pictured here). The series will be set in Staten Island, NY. The “gist” is the daily lives of a group of long-lived vampires. 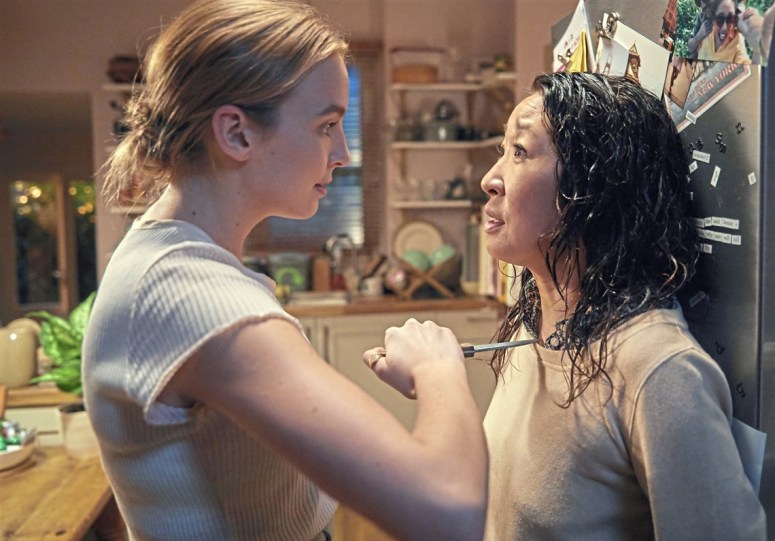 Jodie Comer (left) and Sandra Oh in Killing Eve. Comer is a sociopath killer-for-hire, and Oh is the one whom is hunting her. Both women are obsessed with the other…More female villains in TV, please! And the more complex, the better…

Sam Rockwell as choreographer Bob Fosse and Michelle Williams as famed Broadway dancer Gwen Verdon in the upcoming limited TV series Fosse/Verdon. Rockwell won a supporting actor Oscar for  Three Billboards Outside Ebbing, Missouri and Williams is a four-time Oscar nominee. Maybe this will get her an Emmy nod? Now it’s not so difficult to fathom why I’d like a  TV series about vampires or a series about a female serial killer. But the fact that I’m excited about Fosse/Verdon is a bit…more puzzling! On the surface, it appears to be about musical theater, and Fosse was known for productions including The Pajama Game, Cabaret and A Chorus Line. But he was almost as famous for his off-stage pursuits, including – but not limited to – womanizing/skirt chasing, self destruction (drug and alcohol abuse, chain smoking) as he was for his creative genius. Hmmm, maybe it’s NOT so hard to understand why I’d want to tune into this series! Sam Rockwell is like Gary Oldman in his ability to “chameleon” himself into just about any role, and I’m positive he won’t disappoint as this very legendary choreographer!