Skip to content
Shout out to the MTL teams King Cobra, Dead Guys, Four on the Floor and Ugly Pants Party for advancing to the finals by winning a semifinal game Saturday at Bobby Mcshane’s Irish Pub in Belleville. My team didn’t play enough games to qualify for semifinals this season, but I visited the bar to “scout out” the questions and I played along – I even insisted on writing down my answers on answer slips so it would seem more like I was playing “for real.” One question in particular was particularly challenging to the teams – so much so that a ruling was sought out by the host Stacy by the league as to whether or not it needed to be thrown out: “Birth state of Wild West lawman Wyatt Earp, sixth most populous U.S. state, home to six “Big Four” sports teams. I’m not sure if any teams managed to get this one correct, the last clue was a bit…controversial among the players present. The ruling from the league was that since the the first two clues of the question were legit – and that if interpreted in a “certain” way, the last clue was correct, too. Unfortunately, most trivia players – when given the clue words “Big Four Sports Teams” – think of ONLY professional men’s sports in the NBA, MLB, NFL and NHL – and NOT any other professional sports leagues such as WNBA, or the WPFL. I could overhear other teams working really hard on this question (a team behind me was discussing Pennsylvania teams), I was brainstorming teams in any state that had more than just four “Big Four” teams. California had too many, Texas had too many, New York had too many, and another state (which wound up being the correct state) had too few. Or at least I THOUGHT it did! When the answer was revealed, that’s when players were like…”Huh.. what just happened?” Another player sitting near me who was there “just for fun” said that had he been playing “for reals” he would be a lot more upset about this question.
So how did I do? My only miss of the first half was this sports halftime question, which would have put me in the lead at 33 points. I kind of tanked a bit in the second half, and ultimately wound up with 45 points going into the final, for which I did not know the answer.
And here are the rest of the questions (I will put the answers in the comments):
Round One
1. Digital Age – In November, 2018, Ohio became the first to allow taxes to be paid in what digital currency? 5
2. Musical Movies – According to the Rock ‘n Roll Hall of Fame, the first licensed pinball machine was made by Bally and based on what 1975 movie starring Ann Margaret and Oliver Reed? 3
3. Motown Legends (when I heard this category, my thought was, “This is going to SUCK unless it’s about (this guy).” As luck would have it…)
What Motown legend died in 1984 on the day before his 45th birthday as a result of a gunshot wound? 1
Round Two
1. Space – Named for a German astronomer, what telescope, with the purpose of finding Earth-sized habitable planets – was used between 2009 and 2018? Not confident, I wagered 1 on this, but got it.
2. Nursery Rhymes – In 1878, the first recording ever made was of Thomas Edison reciting what common nursery rhyme? 5
3. Sports (I was a little worried about this category, but luck was on my side) – In Roller Derby, what is the name of the position in which a player laps members of the opposing team? 3 (thankfully the only Roller Derby position I knew wound up being the correct one). 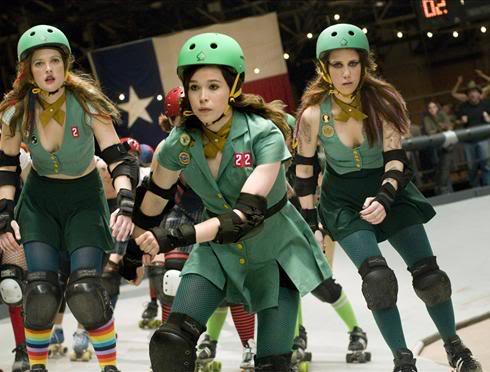 Ellen Page (center) and her fellow  “Hurl Scouts” Roller Derby teammates in the 2009 film Whip It, which was directed by “Gertie” from E.T.: The Extra Terrestrial (aka Drew Barrymore, whom is also in the film…and pictured on the left). Several Michigan locations were used for filming.

Round Three
1. Book to Movie – What 1996 book, which was adapted into a 1998 movie starring John Travolta, was later revealed to have been written by political columnist Joe Klein? 5
2. Modern Medicine – The drug Epidiolex is now available in all 50 states and is prescribed for treating two types of epileptic symptoms. It’s also the first medicine approved by the FDA to have what as its base? It took me a minute, but I came up with the right guess on this one for 3.
3. Food – What food dish named for the French word for “sauce pan” shares its name with the dish in which it’s cooked? 1
Halftime – U.S. States – given the details about the following U.S. states, identify the U.S. state being described.
1. Birth state of country singer Garth Brooks, state’s name comes from Choctaw word for “Red People,” and has only one major sports team
2. Birth state of Steve Harvey, became U.S. state after the Wheeling Conventions of 1861 after the U.S. Civil War had begun
3. Birth state of tennis player Andre Agassi, one of state’s nicknames is “Battle Born State” because statehood was achieved during the U.S. Civil War
4. Birth state of Wild West lawman Wyatt Earp, sixth most populous U.S. state, home to six professional “Big Four” sports teams
Missed #4 (my only only miss in the first half).
Now let’s pretend we had a different halftime question #4!
4. Birth state of Wild West gunfighter “Doc” Holliday, eighth most populous U.S. state, location of Maj. General William T. Sherman’s famous “March to the Sea” during the U.S. Civil War. Or substitute last clue for location of three “Big Four” sports teams (men’s professional sports).
Scores:
Ten teams –
Tongue Twisters – 15
50 Shades of Grey Hair, ??? – 19
Mr. Magorium’s Boner Emporium – 23
Gnarlies – 25
Dead Guys – 26
Four on the Floor – 27
Better Late than Pregnant, King Cobra and Ugly Pants – all tied with 31.
Round Four
1. British TV – What British TV series airing on Netflix has a name that can describe a cold shiny screen on a TV, a computer monitor or a smart phone? Got this for 6, thanks to a “lifeline” from a barfly sitting next to me (he wasn’t there for the game). Hey…I wasn’t REALLY playing for a tournament spot!
2. Newsmen – What journalist, who died unexpectedly in 2008 was the longest-serving host of Meet the Press? A fellow “spectator” sitting by me was all over this instantly, my guess was incorrect. I said…”Well, at least he’s dead, isn’t he?” Miss for 2.
3. Phrases – Will it play in (name of Illinois city) is a common figure of speech that is traditionally used to ask whether a given product, person, promotional theme, or event will appeal to mainstream America. Name that city. 4
Round Five
1. Communications – All radio stations in the United States have call signs beginning with either the letters K or W. What letter is used for the same thing in Mexico? Miss for 2.
2. Magazines – In November, 2018, the Velocity cable TV network was renamed after what magazine brand which was first published in 1949? Lucky guess for 4 (though I was torn between that and one other popular car magazine’s name).
3. Drinking Songs – According to the George Thorogood song I Drink Alone, which person (who shares a name with a bourbon brand) is the “only one who will hang out with me?” Picked another liquor brand mentioned in the song, but not the correct one, miss for 6.
Round Six
1. Sports Fraud – After taking over the company in 1993, what former Detroit Tiger was charged with looting the pension fund of the Chesaning, MI-based Farmer Peet meat packing company of $3 million? The fellow “spectator” sitting near me knew this one, I didn’t (though that town is so close to the one I grew up in you’d think I would have absorbed this news via osmosis, lol), miss for 2.

On the “Bart’s Girlfriend” episode of The Simpsons, Bart sought refuge in his treehouse after getting caught stealing money from the church collection plate. Only to have Jasper show up out of nowhere and say…”Thief!” I don’t think this former Detroit Tiger had anything like this happen after his acts of thievery, though!

2. Economics – The Economist magazine uses what branded food item as a benchmark to measure purchasing power between countries? I didn’t hear the qualifying word “branded,” I put a generic food item instead, miss for 6 (at that point, I really was playing “just for fun”). Time to cash out on those Dirty Blondes (ahem)! Oh yes….BTW…Bobby McShane’s has beer on tap now (they did not have draft beer on my previous two visits to this place). Nice selection! They even have Dragonmead’s Final Absolution Belgian Trippel (at 10 percent ABV, that was just a BIT too boozy for me to have this early in the day).
3. Cats – Pandiculation is a word to describe a common act by cats that involves stretching and doing what? I put “extending the claws,” which was not correct, miss for 4. I should have thought harder about certain lyrics in the Dolly Parton single 9 to 5 (at this point I wasn’t even really thinking, though I DID remember that I needed a couple of things at the hardware store next door, which I picked up after the game).
Scores heading into the final:
Tongue Twisters: 27
Mr. Magorium’s Boner Emporium, 50 Shades of Grey Hair, ???, 43
King Cobra/Gnarlies, 53
Dead Guys, 54
Four on the Floor, 55
Ugly Pants Party, 59
Better Late than Pregnant, 61.
Final Category – Behind the Music
What group of session musicians, inducted into the Musicians Hall of Fame in 2007 – and the subject of a 2008 documentary film – were hired to provide thousands of studio recordings in the 1960s and early 1970s, including Beach Boys’ “Pet Sounds” album?
Final scores of advancing teams:
King Cobra, 106
Dead Guys, 107
Four on the Floor, 109
Ugly Pants, 118
Our next trivia outing will be at Tower Inn on Tuesday. This place could use…a little competition (jussayn).  As always, Go Pods, and stay classy, Denny McLain!