Bars and restaurants are supposed to be able to open up Monday, June 8 in my state, which is Michigan. Memorial weekend this started happening with the northern counties, but as of June 8, all counties will be able to have open restaurants again. With lots and lots of changes – limited capacity, spaced-out seating, servers have to wear masks, more outdoor seating, yada yada yada.

Strangely enough, I’m really not that excited about this! I might make up a batch of popcorn and just…watch what happens with people flooding the bars/restaurants when they open – see which places follow the guidelines – and which ones just pack ’em in. Watching people’s behavior – particularly violent, foolhardy behavior –  during a pandemic has become kind of a spectator sport, hasn’t it? Consider the case of the “Lake of the Ozarks” in Missouri, which recently made headlines because of someone attending a recent “pool party” event getting the ‘rona… 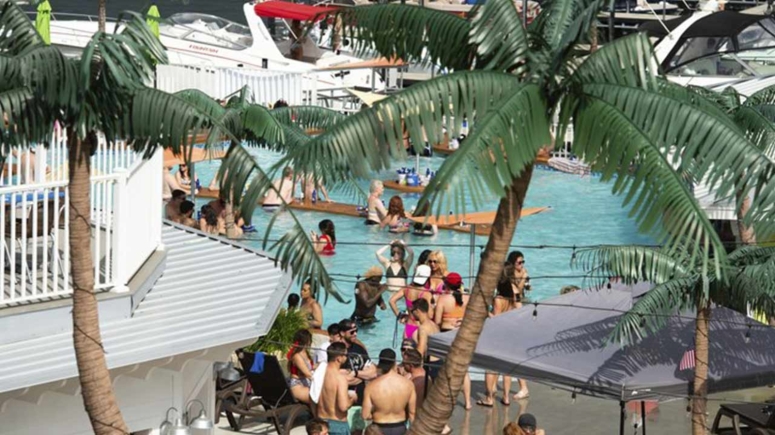 Lake of the Ozarks Memorial weekend

I’m thinking maybe after a couple of weeks of restaurants being fully open, I MIGHT venture into one, with lots and lots of caveats. Being able to sit outside will be pretty high on my wish list if going to a bar or restaurant is going to happen. I just want to be more confident that a “second wave” of COVID-19 cases won’t happen as a result of opening things too soon. Though I’m not gonna lie…being able to get out of the house for at least a couple of evenings a week to have some drinks might be…kind of nice! The upstairs outdoor seating at Aubree’s…Corner Brewery’s beer garden, the 734 beer garden and the lovely rooftop patio at Zukey Lake Tavern in Pinckney which overlooks the lake. Hmmm!!!

Now about the trivia, which was…kind of a big part of my life before “the pandemic!” I’m very, very curious as to how pub trivia will be able to continue since bars/restaurants will have to operate at 50 percent capacity. It just seems so strange…you operate a business such as a restaurant/bar with the idea that you’re going to fill it up with people who will buy food/drinks, right? And from a trivia company’s point of view, the more trivia players, the better, right?

I’m hearing that at least for Sporcle Live, the virtual games will likely still continue even after bars open back up. But the pub version of the games will change a bit. They’re looking at doing a “paperless” format, with players submitting all of their answers via electronic devices (phones, tablets, etc.).

I haven’t heard about what the other trivia company big in my area – My Trivia Live – is going to to do change their game. Let alone schedule a trivia tournament that was supposed to happen at the end of April! Maybe cut the player limit per team down to two instead of four? That would certainly satisfy the “50 percent capacity” caveat, wouldn’t it? Maybe spread the finals tournament over two different days and split up the teams into two groups? Gah, I have no idea! And how would the prizes work?

Here we are with the current Sporcle Live season pretty much done when it barely got started…and another MTL season is heading into the final weeks in June. I honestly have no idea whether I’ll bring a trivia team into a pub again. It’s too soon to tell. My husband seems to like the virtual games – mainly because he doesn’t have to listen to “that annoying music” while answering questions and deal with other noise in the room. Good points!

Next week, my husband and I plan to do a camping trip “Up North.” All rustic accommodations – no electricity, no running water, no flush toilets, no showers – pick a campground with as much space between sites as possible. Could a trip to a restaurant/bar with outdoor seating be possible? We’ll see! We’ll see…