Editor’s note: A friend said a recap of this “Face the Music” game appeared in her memories on Facebook today.

Kimberly and I hit up the My Trivia Live “Face the Music” scene Tuesday at The Plymouth Roc, managed to finish in second place with a $20 gift certificate after losing out on a tiebreaker for first place. Darn Ramones, anyway! Who knew they recorded THAT many studio albums? Uh, apparently I didn’t! Since this was a “name that tune” format, I can’t exactly craft this like a traditional trivia game recap, but I’ll do my best to summarize the happenings! The theme Tuesday was the solar eclipse – with the different rounds having themes such as “eyes” (all artists/songs had eyes in the title), “moons,” “sun,” “day,” “night,” light,” and “dark.” We were tripped up by several of the tunes played, even ones from “eras” of music we claim to know pretty well! Just when I thought I knew mid ’80s music pretty well, they play a song by THAT band…more about that in a bit!

Round One Theme – “Eyes”
1. Eye Colors – What color eyes does the woman have in the 1978 song with the following lyrics? “Well have you seen that girl in the corner/I’d like to take her out of her chains/
‘Cause if I have my way with you baby I would be changing your life today/Your eyes got me dreamin/Your eyes got me blind
Your eyes got me hopin/That I’ll be holding you close tonight.” No, not at all rapey! We missed this one, never heard of the song – or the guy. If anyone wants a hint, this color is mentioned in the title of a 1980s duet featuring Paul McCartney.

2. Band Names – What is the name of the band who recorded an early 1980s song with the following lyrics: “I was born to love you/but I’ll never be free/You’ll always be a part of me.” These aren’t the lyrics from the song they actually played, but these are the ones I know more “by heart.” I was all over this one instantly for 5.

3. I don’t remember what song they played here, but Kim knew the answer to this one…finished the round with eight points.

1. What band recorded the 2014 album “Shut Up and Dance?” Kim’s daughters like this song, so she hung her head in shame a bit for only coming up with a “close to right” guess, miss.

2. What words precede the word “moon” in the 1982 Bob Seger single? Luckily I changed my guess right before handing it in…otherwise I would have to blame my stupidity on the moon! 5

3. What North American band name shares its name with a type of room you would be likely to find in a classier hotel? They had hits with “New Girl Now” and “Feel It Again?” They were a Canadian band with higher-charting singles in Canada than in the U.S., if you want a hint. Their name has “moon” in the title. We had no clue on this one…miss for 3.

3. Song Titles – What is the title of a 1997 U2 song featuring the lyrics “Intransigence is all around/military still in town/armour plated suits and ties/Daddy just won’t say goodbye?” These aren’t the lyrics they actually played, but they are my favorite lyrics from this song, lol. Bono found a way to inject a four-syllable word into a song, gotta hand it to him! I was all over this for a much needed 5 points. 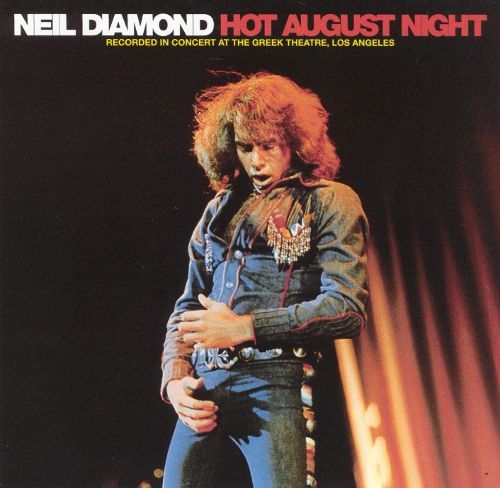 This fella will be asked about in the next question…oh yes, I just gave away the answer, too!

1. Album Names – Name of 1972 double-live album by Neil Diamond recorded at the Greek Theater in Los Angeles – I was all over this…! What is Neil doing in this picture (besides wearing a “Canadian Tuxedo,” lol…) And I know if you already looked at the photo, I basically gave away the answer…but in a typical MTL game, the first question in round 4 is usually the “newsletter” answer, so there!

2. Song Name – Name of Paul McCartney single featuring the word “nights” from the “Give My Regards to Broad Street” album. I was close but no cigar on this title…bangs head on table. JK! Music trivia night is my night for just having fun! I get competitive enough on regular trivia nights, lol!

3. Band Names – Name of band recording “Freakazoid” song. Kim all over this one for 4…

1. Song Titles -What lyrics, which also make up the song title, precede the following lyrics in this Journey song? “…And the sun shines on the bay/I want to be there in my city/Ooh, ooh?” easy 6 points.

2. Song Titles – Title of late 1980s hit by Belinda Carlisle. We were “close” on our answer but not exact – but the host gave us the points anyway because he said we were the only team to get even a little close on this, thanks to Kim… 4.

3. Song Titles – Name of song featuring the following lyrics: “So long ago, I don’t remember when/That’s when they say I lost my only friend/Well they said she died easy of a broken heart disease/As I listened through the cemetery trees.” The lead singer of this band is the son of a legendary rock singer. Kim knew this one…

1. Band Names – Name of band who did that really annoying “I Believe in a Thing Called Love” song from 2012, which used to be played on too many trivia nights to count. And it sent my husband Mike into so many fits, I HAD to learn the name of this song/artist, which is the only reason I got this right. Which totally surprised the hell out of Kim, since I don’t usually know any of the “modern music” answers! Dear lord this song is just awful…but it was pure millennial chow at the time.

2. Song Names – 2000s song title by Hoobastank. Not even bothering to use the google to see if I spelled this right. We missed this for 2.

Final Category – Songs that Make you Think of Eclipses

We had three song clips, had to name two of the artists out of the three. One was the “Future’s So Bright I gotta wear shades” band, one was a band that recorded a remake of Bonnie Tyler’s “Total Eclipse of the Heart” in 1995, and the other was the band that recorded “Steal My Sunshine.” We managed to get two of these, and were in a tie for first, had to answer how many studio albums the Ramones had, we guessed too low, our opponents were closer in their guess. So just $20. Plenty to cover our bar tab next time!