Funny how a seemingly harmless conversation during a trivia game can wind up planting the seeds for obsession in your brain! I was chatting with a player on a friend’s team (I’m subbing for the friend on her team), and he quizzed me about whether I knew who the keyboard player was for the British band The Babys. I said no, other than knowing that John Waite was the lead singer, my brain was pretty much tapped. But when I learned who the keyboardist was for the band, it sent my mind into a trivial frenzy – and made me briefly obsessed with rock “supergroups!”

John Waite was not only the lead singer of The Babys – but also had a successful solo career in the mid 1980s, with his sappy ballad Missing You topping the charts in 1984. The song was cheesy, but not even close to being as cheesy as the song he sang with the “supergroup” Bad English in 1989 (more about that in a bit).

What’s a “supergroup?” It’s basically a band consisting of key members of other popular bands, making it kind of  like a “dream team.” You may know of some trivia teams like this – or maybe you’re PART of a trivia team like this! I’ve only done the “dream team” thing a couple of times, for theme trivia nights – in 2017, I teamed up with members of three other pub trivia teams for an ’80s music trivia theme night (we wound up winning first place).

Speaking of the 1980s! What better time for power ballads, lovely  harmonies, long permed hair, tight pants that didn’t have ANY spandex in them and wailing guitar solos? 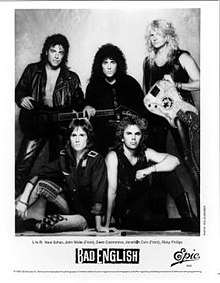 Clockwise from upper left – Neil Schon (Journey), Deen Castronovo (Journey), Ricky Phillips (The Babys), Jonathan Cain (Journey/The Babys) and John Waite (The Babys). Their highest-charting song was When I See You Smile, which hit #1 on the U.S. charts in 1989. I would  become a borderline diabetic if I ever had to hear this song again! Vis a vis some lyrics to this song, which was probably popular at my high school prom (which I did not attend):

In answer to this trivia player’s question, Jonathan Cain was the keyboardist for The Babys, and also later for Journey (and Bad English).

Maybe you were more of a “buy American” kind of person when it came to “supergroups” in the 1980s and you wanted ALL of the band members to be American! For those folks, there was the Damn Yankees (not to confused with the Broadway musical Damn Yankees which helped elevate dancer Gwen Verdon to stardom): 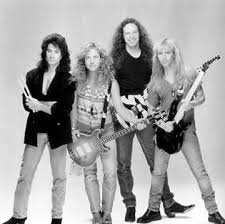 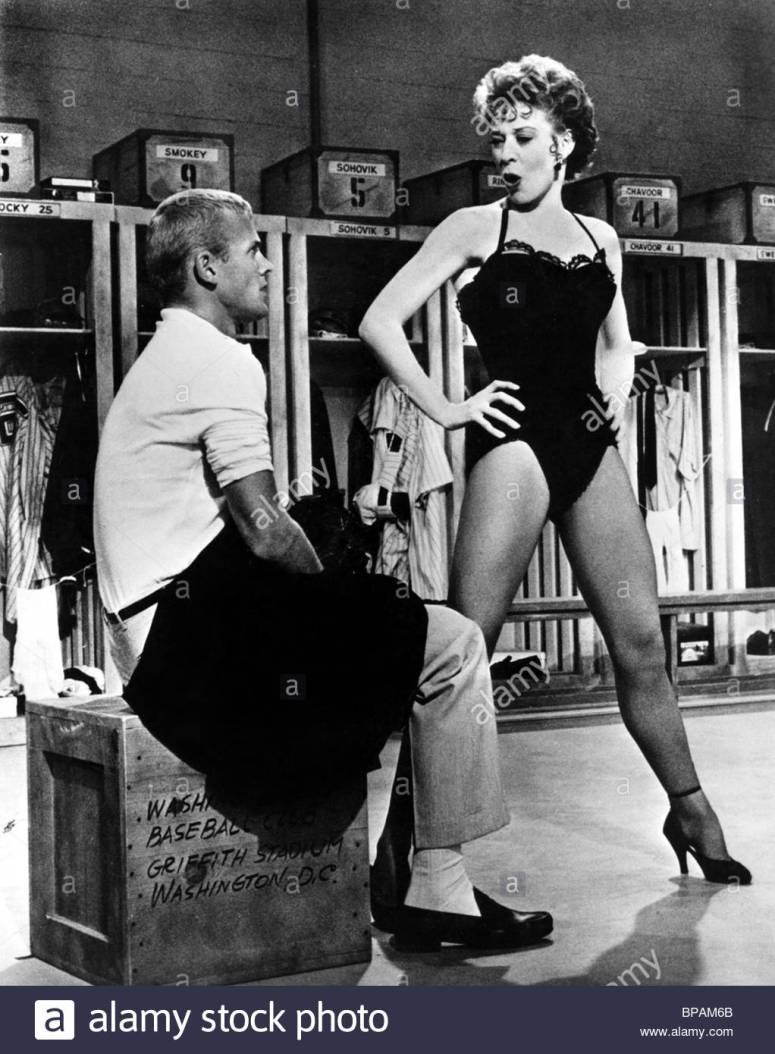 Tab Hunter and Gwen Verdon in Damn Yankees (1955). Verdon met Yankees’ choreographer Bob Fosse while working on this play, and they would wind up becoming romantically involved – and getting married five years later – entering into a virtual lifelong creative partnership (even after they were separated as husband and wife but remained married). Want to learn more about Fosse and Verdon? Watch the FX series Fosse/Verdon (which airs Tuesday nights). I’ve really enjoyed the first couple of episodes (though my husband won’t watch them with  me, LOL)!

Now…wouldn’t it be nice if at least one of the useless facts I presented in this silly blog wound up being the subject of a trivia question in the near future?