I made a Costco run after work today. Convenient, since I work only 1.5 miles away from a Costco, so I can easily make a “run” after work. Looking around at other shoppers as I walked in, many were pushing out loaded carts of…stuff. And things.  Paper towels, toilet paper, large bottles of soap, boxes filled with more stuff, and loading them in their trunks or tailgates until their cars were as sufficiently stuffed as they could be. No room in the car for the kids? No problem! Use Costco’s trusty child care service (executive  members  only), drive home and pick up more stuff – and the kidlets! After playing in the ball pit for hours they will be happy to see you! (Jk Costco doesn’t offer child care…yet).

Ball pits –  a great way to immobilize AND terrorize your little ones!

Me? I just needed a couple of things…We’re running out of coffee, and my husband said he wanted to have a “night in” tonight with mixed drinks. So I picked up a bottle of vodka after gassing up the car (so technically I bought three things at Costco today). Help me – I am turning more into a yuppie every day! I was actually eyeballing a pair of yoga pants today (LOL)! They were purple and swirly…(maybe when they go clearance).  While I was waiting in line for gas, a waspy woman ahead of me was pumping gas into her car had a cup of Starbucks coffee in the other hand. Seriously…you can’t put down your damn coffee and pump gas? Does your car not have cup holders? Are they filled with other Starbucks cups that used to contain pumpkin spice lattes? Well, clean your car!  Now I love coffee too, and will have a death grip on mine on some weary mornings, mind you…but that was just WEIRD. And also kind of gross. Gas pumps are icky things teeming with germs. Yes, even Costco gas pumps.

Match made in heaven? The receipt checker said to me, “That’s a winning combination.”

A little “pro” tip for pouring from a 1.75 liter bottle? Those things are HEAVY!  Who wants to use two hands to pour their hooch?  If you want to use the bottle as a handheld weapon in a bar brawl, two hands is OK! But for pouring drinks? Not so much. And since I have some bursitis action in my elbow from repetitive stress, those heavy bottles aren’t too fun for me to pour! Heck, on some days, just lifting a mug of beer to my pie hole can be painful! What I do is take a “bike bottle,” or any other lightweight bottle with a squirt-style cap and pour some vodka in there. It will fit nicely in the freezer, and the squirty top will fill up those shot glasses easily! Also a nice hack if you’re camping/tailgating and don’t want to deal with glass. But if you have a smaller liquor bottle from a previous three sheets to the wind adventure, you can pry out the plastic widget thing and pour your Kirkland vodka into that! Especially if it’s a super fancy pants vodka bottle and you want to impress your guests by pouring Kirkland vodka into a Tito’s bottle. Or whatever vodka bottle you deem to be “fancy” in your parts. Burnett’s is usually fine for me, which one reviewer called “king of the bottom shelf.” So I guess you could say my bar is rather low! If you’re just mixing it and not drinking it straight, how fancy does it need to be? 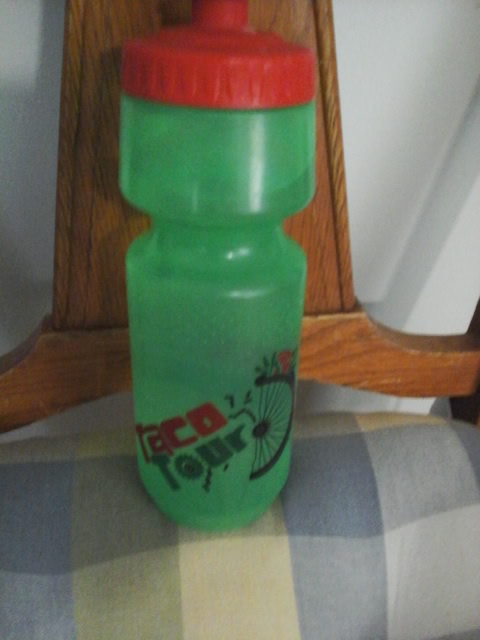 Bike bottle filled with Kirkland American vodka. They also make a “French” version of vodka, but I’ll take the cheaper Murkan vodka! Only $15.99 for 1.75 liters! Did not actually notice how much the “French” version was. Bottoms up!