My trivia team might not be the best when it comes to winning money in regional tournaments (we certainly proved that last Saturday…ugh…still a bad taste in my mouth from THAT game) – but my trivia team really is the best! They helped shake me out of a very grumpy, sullen mood last night (it’s been a trying week, and not just because of that tree that tried to kill me Tuesday morning…or at least destroy my car, lol), helped bring the funny countless times, teamed up really well on the questions and cheered me on when it was final question time and the category was “presidents.” And they also stuck with my “Wink Martindale” answer on the game show hosts halftime round which turned out to be correct. We’re continuing to narrow the points gap between the “Pants Team,” and now only trail them for first by just six points (not counting the bonus points they earned by playing at another show). Challenge accepted! I’m confident we can manage to finish in first place at The Wurst Bar over the next four weeks! Last night, we finished in first for the second week in a row with a $30/first place gift card and unlike last week, did so by getting the final question right – instead of wagering zero! Yes, I know how some of you teams out there feel about those zero aka “sucker” bets… Yes, winning by wagering zero is a filthy way to win, kind of like kissing that handsome (or pretty) cousin of yours – but sometimes a team’s gotta do what a team’s gotta do – which is get those bar tabs covered! Now who can argue with that logic? If wagering zero and winning beer money makes us suckers, well then may we suck with such awesome skill that we…I’ll stop right there! I need a distraction…game questions? OK!
Round One
1. Capital Cities – Dublin is the capital city of what country? You can’t say “Dublin” without saying “Duh…” 5 Seriously, if you miss this question on a trivia night, you need to think about finding other hobbies, lol! May I suggest bowling?
2. Actors – Who directed and co-starred in the 1969 film “Easy Rider?” 3
3. Advertising – What network previously used the slogan “Must See TV?” 1
Round Two
1. Mythology – What god of nature, shepherds and flocks in Greek mythology is also known for his musical pipes? A bit of debate, but got for 5.
2. Canadian History – The year 1966 marked the last year Canadian Mounties were trained to ride and care for what? Apparently quite a few teams put a different hooved animal known in the ‘toon world for hanging around a flying squirrel (yes, really). Now picture THAT! And of course this made Mike and I think of an episode of “Ren and Stimpy.”

Ren and Stimpy become “Kilted Yaksmen” in an episode of Ren and Stimpy, which was just an excuse to poke fun at Canada, lol…

3. Animal Groups – A group of geese on the ground is known by what six-letter name? For an extra three-point bonus, which of the following animal groups is NOT a true animal group? Tower of giraffes, wrath of wrens, scurry of squirrels? Lots and lots of debate between two of these, and we even consulted the “bones,” which led us to what would have been the correct answer. Nope…missed the bonus and the one point we had left. Mike felt really, really awful about this (there, there)!
Round Three
1. Comic Strips – What is the last name of “Peanuts” characters Linus and Lucy? And for some reason, this led to a conversation between Brad and I about the show “What’s Happening?” and eventually, “Sanford and Son.” He quizzed me on Fred Sanford’s wife’s name, and I told him I had a dream years ago that had Sanford’s son Lamont in it – we actually had quite a long conversation. What a tangled web our brains weave! Analyze THAT, Freud! 5
2. Live Performances – In 2013, Beyonce performed in the halftime show at the Super Bowl with members of what former girl group? Yay, I get an R&B music question correct! 3
3. Movies – What 2012 sci-fi film was promoted as a sequel to the “Alien” franchise and featured Michael Fassbender, among others? 1
Halftime – Match the game show host to the shows.
Shows:
1. The Match Game
2. Tic, Tac Dough
3. The Price is Right
4. The Joker’s Wild
Hosts:
Bob Barker, Peter Marshall, Jack Barry, Gene Rayburn, Wink Martindale and Chuck Woollery
Brad was really super sure of one of them, we were all sure of one of them, and I was really sure of Wink Martindale’s show, and we successfully debated between two of them of which we weren’t super sure. Got all 10 points! Woot!
Halftime scores: Eleven teams, scores 18 to 36, with ‘Pods in first. Guest “barhopper” Mike from One Is the Loneliest Number was tied for fourth with 26, and our rivals “Pants” was in second with 32.
Round Four
1. Countries – What is the main export of Uganda? Newsletter clue, 6.
2. Famous People – What U.S. general was known as “Old Blood and Guts?” 4
3. Books – What Roald Dahl book begins with with the line “These two people are the father and mother of Mr. Bucket?” 4
Round Five
1. Animated TV – The names Leela, Fry and Zoidberg are the last names of characters on what animated sitcom? This was probably a social…
2. Chemistry – Name one of the three types of chemical bonds. I’m not normally the go-to “SCIENCE!” person on the team (especially when it comes to chemistry), but I knew two of these (thanks to my tough sophomore science teacher Mr. Abbott, who was super intimidating…). Flashback, he made us do some kind of writing assignment about chemical bonds in the class, and mine involved someone named “Ike the Ion.” I don’t remember the rest of the plot, but I think Ike found love or something… Ah, memories…
3. Geography – What British territory known for its resorts is the most populous of all remaining British territories? Brad suggested the right answer but we went with another (sorry, man!), miss for 2.
Round Six
1. Music – What ’80s band had hits with “I Wanna Rock” and “We’re Not Gonna Take It?” 6 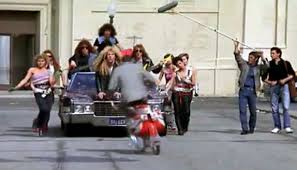 2. Products – What brand of dish liquid was known for the character “Madge” in its advertisements? 4
3. Current Events – What Indonesian island has had a volcano erupting in recent weeks? Miss for 2. Clearly we are flunking at current events!

🙂
Scores – Eleven teams, scores 29 to 68, with ‘Pods in first, right ahead of Pants, who had 62 points. One was right in the running with 60 points/third place.
Final Category – Presidents
Name two of the four U.S. presidents who were members of the Whig party. Mike really challenged me here, and made me name two non-sequential Whigs.
Final Standings: Do These Protons Make My Mass Look Big, 69; Pabst Blue Ribbon (moved up from sixth), 106 and ‘Pods, 136.
I’ll be playing next Monday in Canton with Kim unless plans change! I had planned to play tonight at Original Gravity, but those plans did change! I no longer have Friday off:( Oh well, I need the money! Look for our next game recaps sometime next week. As always, Go Pods, and stay classy, General George Patton!