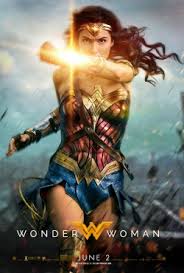 We’re on the eve of the new “Wonder Woman” film being released in theaters, and it’s definitely something people are talking about.  It’s pretty huge news that we’re finally getting a superhero movie with a lead female character! Yes, we’ve already had Elektra, I know, I know…but this is “Wonder Woman!” Gen-X boys grew up being able to watch Lynda Carter as Wonder Woman, who had her own TV series debuting in 1975. My husband STILL has such a fondness for Lynda Carter, even after about 40 years! That’s some staying power!

It’s starting to look like this movie won’t suck. So far Rotten Tomatoes has given it a 96 percent “fresh” rating, as opposed to last year’s Suicide Squad and Batman vs. Superman – Dawn of Justice – both receiving “rotten” ratings in the 20 percent range. Yes, maybe this movie won’t suck!

I’m excited about this movie on many, many levels. One, it’s a superhero movie, what’s not to be excited about? Violence, drama, bad-ass costumes, weapons, yes, please! Also, it features a female character, which of course I’m excited about, because, hey, I’m a female person too! But I’m also excited for one other reason, which is something that is a little “unique” to me (drum roll) – ahem – Wonder Woman is an Amazon! My husband likes calling me “amazon.”

This is something particularly special to me, as a tall woman. It’s almost hard for me to put into words, but as this is a blog, well, I’d better damn well try, right? Where do I start? Well, let’s just say I never really felt like too much of a superhero growing up. Growing up as a tall female had its… challenges. The other kids teased me about it pretty incessantly. I didn’t even KNOW who Andre the Giant was until some of the other boys started calling me that as a nickname! And curse whatever person created the “Jolly Green Giant.” Curse you! When I wasn’t having unflattering nicknames bestowed upon me, there were the questions…so many questions. How tall are you? Do you play (pick one or more – basketball, volleyball)? Are you on the track team? And how tall are you? Are your parents tall?

Guys weren’t exactly lining up to ask me out on dates. The height factor was…intimidating. Truth be told, most guys just didn’t want anything to do with a woman taller than them, well, at least not in a dating scenario. I mean – how would THAT make a prom photo look?  What would the other guys say? The horror! 🙂  I had quite a decent set of guy friends in high school, one of whom actually wound up asking me to my senior prom (I declined the invitation). I found out later he had a huge crush on me, he wound up joining the Navy, meeting a Japanese woman to whom he is still married, and moving to California.  It wasn’t just my height scaring the guys away from asking me out. When you grow up being teased, you kind of develop a defensive personality paired with a sharp tongue. A good side effect is the sense of humor, which you tend to develop when you’re trying to deflect attention away from people staring at you and asking you silly questions. Try to make people notice things about you that have nothing to do with height! Hey, I might be freaky tall…but I’ll also make you laugh!  This could also be why I always gravitated toward writing, too. But enough soul searching, let’s get back to this blog already!

Some tall girls apparently only want guys who are taller than them. I always thought that was silly – why narrow down my options too much? And how likely am I, really, to meet a dude taller than me, let alone not find him repulsive somehow? How much sense does it make to pigeonhole your choices in that way? “Well, at least he’s tall – he might be an asshole, but he’s got four inches on me, right?” Uh, no… Again, silly logic. I went on a couple of dates with shorter guys in early college (neither of these dates went well…at all), and eventually I went on a date with a shorter guy I would end up marrying. And we recently celebrated 20 years of marriage, woot! And to his credit, he’s always been my biggest fan.

Well, maybe when the new “Wonder Woman” film is released, me – and other tall women – will have a whole new set of fans. Just recently I ran into two women randomly who both seemed to be Amazon worshipers. One was a shorter female in bar, who outright gushed over me for being tall (yes, she was a tad bit drunk). The other was a clerk at a coffee shop, who complimented my “Wonder Woman” t-shirt and added, “When you walked in, I thought you WERE Wonder Woman!” Uh, OK?

If Amazon worship becomes a thing as a result of this movie, I’m not really sure what to make of it. I’m not sure I want this kind of attention any more than  I wanted other kids giving me silly nicknames or asking me about what sports I played! This just might be a whole new lifestyle for me to adjust to. Teasing/silly questions? I can handle those. I have mellowed quite a bit with age, I no longer deliver a backhand smack to yahoos calling me a tall drink of water in a bar. I can even handle the “do you play sports” questions a lot better than I used to. Recently, when someone asked me the sports question, I said, “No, and just to clear the air, I also don’t play these sports either,” as I proceeded to list the sports they didn’t ask about. But then, maybe Amazon worshiping will just make me want to fly away in an invisible plane…we shall see! Now where’s that lasso? 🙂