We’ve been known to have some strange, strange conversations on our trivia nights. Wednesday night was no exception. I started talking about my “fantasy du jour,” which is owning my own 17-foot tall pet giant sloth, and Brad, who happens to have a degree in evolutionary biology, started talking at length about megafauna (fancy pants word for really, really, YUGE animals, most of which are extinct now). Seriously, he should get a blazer with suede elbow pads and become a science teacher! He’s smart, he’s likable, and science teachers always seem to be in demand. Get certified, Brad! Anyway, there was a really, really large species of eagle, which used to be “the” apex predator of its time, mainly in the New Zealand area – until humans came along and ruined the party (we’ll talk more about that in a bit).

Illustration of haast’s eagles putting smack down on the poor defenseless…and delicious…moas.

So this giant eagle, also called the Haast’s Eagle, used to prey upon this giant flightless bird called the Moa (pictured), and all was good in the universe. The moa tasted like chicken, and the Haast’s Eagle was the only one who could blog all about it on Pinterest, and share photos of Moa Fricassee, Moa Jambalaya and some other completely anachronistic dish (ahem). If Pinterest existed, of course. 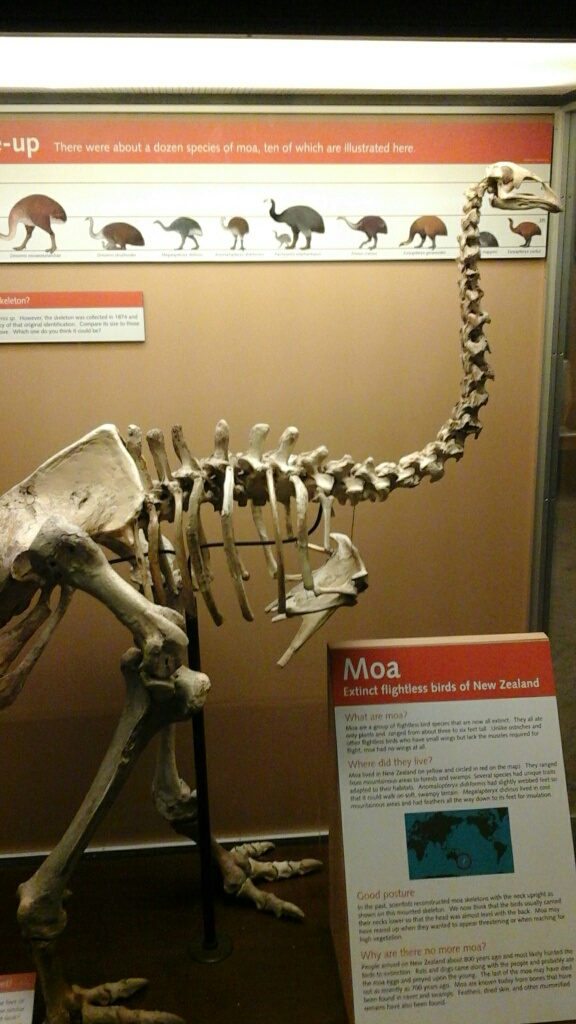 Moa skeleton on display at the Natural History Museum in Ann Arbor, MI.

But soon enough, native Maori people started trickling into the picture, and they were hungry. They saw these giant moas standing around and not putting up too much of a fight, so they started poking them with their spears and hosting giant moa barbecues (we’re pretty sure they were delicious). They did this enough until the poor moas went extinct, which meant that the Haast’s Eagle, which fed primarily upon the moas, eventually went extinct, too. And this concludes our first attempt at a post about SCIENCE! Maybe we’ll continue to do more of these on a regular basis!