My husband and I arrived at a lovely pine forested rustic campground in the Grayling area of Michigan Thursday evening and set up camp. ⇓ 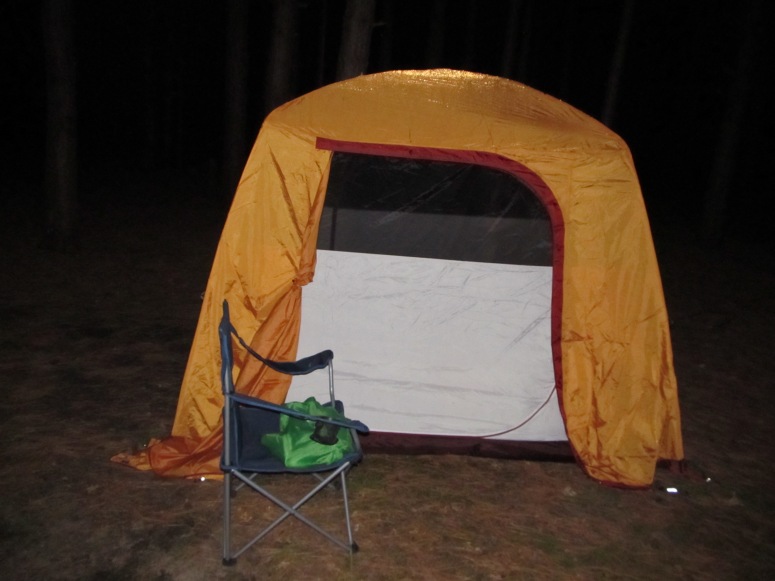 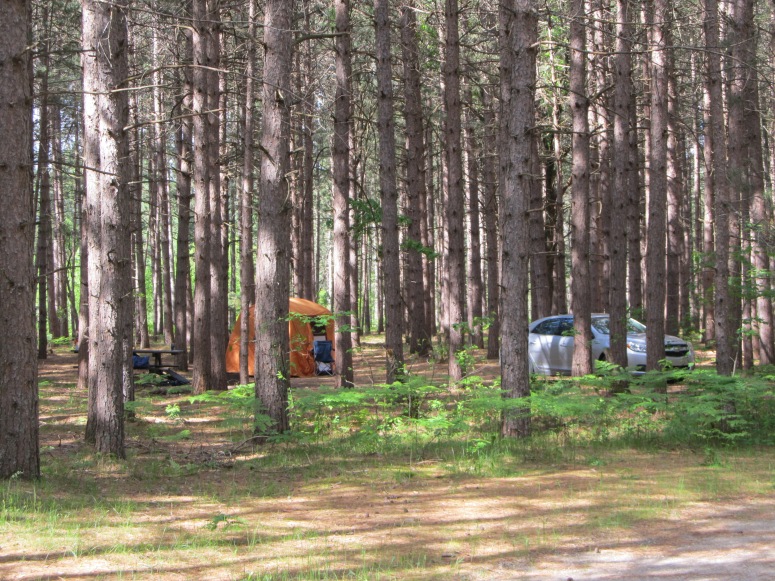 As it started to get dark, we decided a campfire was in order – only we had no real “bundles” of wood (the kind you buy at a gas station or store) – only piles of downed wood by our fire pit that were there when we arrived. We decided we’d just try our luck with the scavenged wood instead of the fancy split wood you can buy for (usually) $5-$6 a bundle.

Only problem was, a brief rain shower had recently sprinkled the area with moistness, including all of our downed wood. It was too late to try going to a store to buy some nice dry wood (everything closes earlier during a plague), so we decided to use all of our tricks available to us. Dryer lint, store-bought fire starters/fire sticks, cardboard, whatever paper we could burn. Always the same result – burn a little – then fizzle, fizzle, fizzle. He tried fanning the fire (he has a method for this – it’s pretty awesome to see) using various flat objects such as paper/plastic plates, butt pads, Frisbees (we really need to get one of those bellows things… mental note – put on shopping list along with a saw – more about that in a bit). The fanning helped keep it from totally dying, but still didn’t really get it going.

He was getting very, very frustrated. It’s always “his” job to build and tend to the fire, which wasn’t happening. And he is good at his “job,” BTW! I’ve seen him get fires going in blizzards – and even in the pouring rain! He never uses lighter fluid or other flammable liquids. He just had too many negative modifiers going for him on this evening (not the least of which is arthritic fingers).

We briefly discussed and rejected other options – “Let’s just go to the Hideaway (local bar), f— this fire.” “Let’s just go to bed early – maybe try playing games in the tent.” Nope, nope, nope! There was no other option than to try getting that blasted fire going, especially since the temperature was really starting to take a nosedive. I think temps got into the lower ’40s/upper ’30s that night.

I don’t know how many drinks I had polished off when I decided this (which may explain why my memory may be a bit fuzzy, bear with me) – but something in me just kind of “clicked.”

I decided it was no longer exclusively “his” job to build and tend to the fire, I was going to help, too! We’re a team, after all – aren’t we? He didn’t ask for help, but I wasn’t going to just sit on my ass while a campfire wasn’t burning. So I started strategically spreading little piles of dryer lint around hoping the little fires would lead to bigger fires. Got the fire sticks out of our camp bag and spread those out, too. This led to some little furnaces, but nope, that didn’t really work either.

Then I just said aloud, as if I had a light bulb over my head:

How about that little bag of charcoal? What could that possibly hurt?

Charcoal does burn, after all! Maybe a bit slowly, but surely our “match lighting” charcoal might help salvage this flaccid excuse for a fire, won’t it?

After about a half hour or so the fire decided it was going to wake up. Again, my memory is kind of fuzzy, but it could be because of the charcoal, it could be because I went into “madwoman” mode and just started snapping sticks and feeding them into the fire, putting pine needles into the fire, walking around the campsite and beyond finding more sticks to burn, I was hell bent on making sure we had a f—ing fire! If I took a walk to take a whiz or came back from the outhouse, I’d better damn well not be empty handed – there had better be some wood in my hands (no dirty jokes, please)! I can chalk up this mental state to part liquid courage – part inner stubbornness. Maybe a bit like General Ulysses Grant! I was on a mission, and that mission was to help make sure we had a fire, consarn it!

However it happened…it happened! Our puny little sticks really started to catch, and we would even be able to put in some of the thicker logs too (sadly we had no way to chop or saw them…our hatchet is so dull it won’t cut through melted butter and we didn’t bring a saw). Voila, a fire made with “found” wood! ⇓ 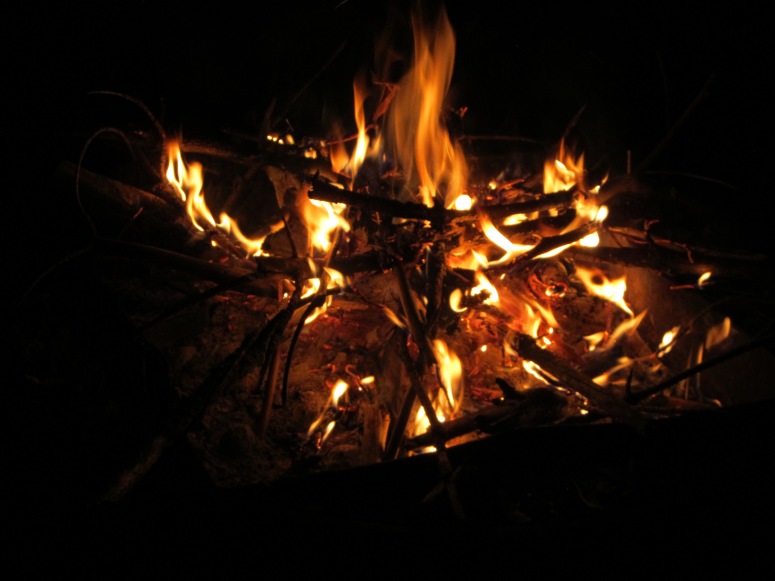 We wound up buying some bundles of wood the next morning so our next night’s fire wasn’t as much of a chore!