As a special “treat,” I’ve attempted to do an “Easter” theme in this question set, though not all of the questions will be about Easter! I hope you all have as much fun trying to answer these as I had writing them (boy did I learn a lot)!

Game One
1. Games – What preschool/kindergarten game’s object is to walk in a circle, tap on each player’s head until one is finally chosen; with the chosen player having to chase the picker to avoid becoming the next picker?
2. ’90s Albums – What American band recorded the 1997 album “The Colour and the Shape,” which included the single “Monkey Wrench,” which peaked at #9 mainstream charts in the U.S.?
3. Actors – Before playing the title character on “Dexter” beginning in 2006, actor Michael C. Hall appeared as David Fisher on what HBO series from 2001 to 2005?
4. Companies- What confectionary company which produces a chocolate egg candy popular around Easter – was founded in Birmingham Warwickshire, England in 1824? Kraft Foods successfully acquired the company in 2010. Give yourself a bonus point if you can name the candy company that lost out in a bidding war for this company around the same time.
5. Children’s Stories – British author Margery Williams published which book in 1922 about a stuffed rabbit’s desire to become “real?”
6. Comics – What Dark Horse Comics character’s real name is “Anung Un Rama,” which means “and upon his brow is set a crown of flame?” This character made his debut in 1993 and was featured in films released in 2004, 2008 and 2019.
7. Bunnies in Song – What other animals does Little Bunny Foo Foo bop on the head per the lyrics of the song “Little Bunny Foo Foo?”
8. Calories – Within 25, how many calories are in a Cadbury Creme Egg?
9. NFL News – Tom Brady along with actors Adam Sandler, Matt Damon, Ben Affleck and Sarah Silverman – among many others – recently participated in what type of online tournament to raise money for COVID-19 victims in partnership with the charity Feeding America?
10. TV Sitcoms – Laura Prepon played “girl next door” Donna on what Fox sitcom airing from 1998 to 2006? This is a “Brad” question!!!
Mystery – Rabbit Anagrams
Answers will reveal names of books, TV shows or movies featuring rabbit characters.
1. Patter Bribe
2. Whiten Hope Ion
3. Irked Ad Noon
4. Withdrew Pa son
Game Two
1. Film Franchises – Within one, as of April, 2020; how many total films are there in the “Wizarding World” franchise – which includes both “Harry Potter” films – and “Fantastic Beasts” films?
2. Old Traditions – The German word “Osterhase” roughly translates into what word representing a traditional Easter symbol?
3. New Traditions – What male Italian tenor streamed a live concert on Easter Sunday (2020) at the Cathedral of Milan?
4. Contests –  The St. Paul Pioneer Press was the first newspaper  to hold a contest building dioramas out of what popular Easter candy in 2004?  Similar contests are also staged annually by The Chicago Tribune, and the Seattle Times.
5. Landmarks – The Buddhist temple complex Angkor Wat is located in what Southeast Asian country?
6. Movie Nicknames – A rookie police officer nicknamed “Rabbit” is among the cast of goofy characters in what 2001 comedy film featuring the “Broken Lizard” comedy troupe?
7. Voiceovers – Which character provides the voiceover narration at the beginning of The Lord of the Rings: The Fellowship of the Ring? Bonus point for also naming the actor.
8. Animals – The Leporidae family of animals which includes representatives with the bonomial scientific name Sylvilagus floridanus, are better known by what name?
9. U.S. States – Delaware was the first U.S. state admitted to the Union December 7, 1787. Name any one of the other two states also admitted to the union during that month and year. Both for a bonus point.
10. ’60s Hits – What American band recorded the 1967 hit song “White Rabbit,” which was from their album entitled “Surrealistic Pillow?”
Visual mystery:
Identify the names of the movies or TV shows based on their scenes displayed in a diorama made of Peeps candies. 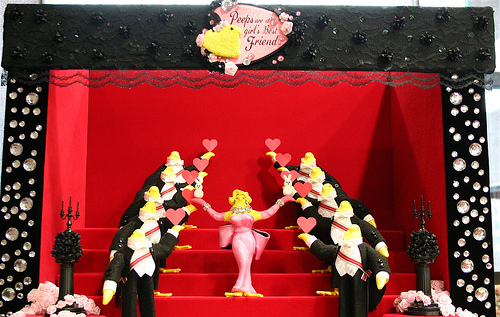 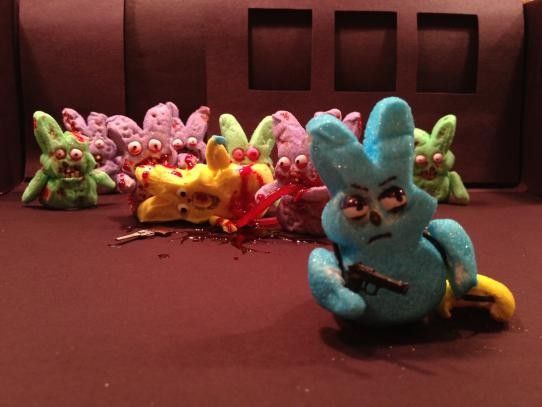 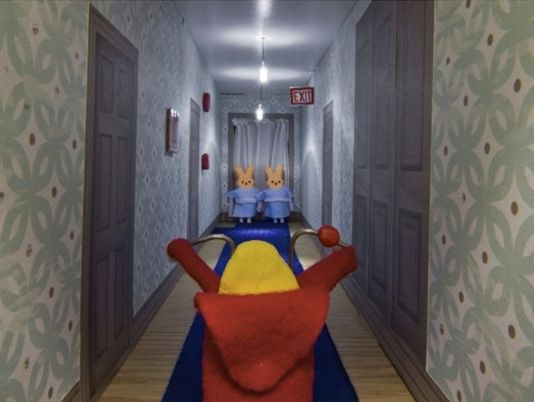 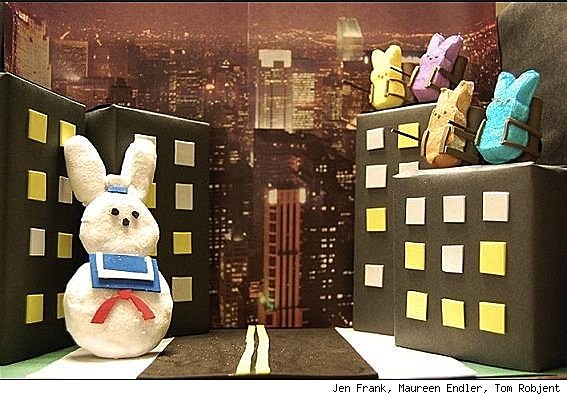