We decided that our trivia game on Wednesday wasn’t quite enough to give us our trivia fixes, so we went out for seconds – and played Sticks’ Thursday trivia scene. We predictably screwed up a question about artists in game one,  unpredictably got a country music question correct in game two (nice work Evan!), and flubbed a college basketball final question. As for the game two final question? Let’s say that one… “excited” me a bit #triviagasm! You know those trivial facts you uncover on your own just out of curiosity – then keep around in your brain (like fine china in a cupboard) with the vain hopes they’ll one day be needed for a trivia question? Like remembering the “other” non-famous band members in the British band the Yardbirds – or the names of EGOT winners? Yeah, it was kinda like that! But you’ll have to read on to find out more (or just skip until the end if you’re strapped for time…I totally get that)!

As for the game, we were barely edged out of prizes in game one, in which we bet zero on the final category “college basketball.” We just didn’t have the right players in the mix…but wagering zero still put us in third.

How about some questions? Assume they’re abbreviated…

1. Animals – Baby Huey, Darkwing and Launchpad are all what type of (animated) animal?

2. Elections – Which specific person is elected at a conclave – which takes place at regular intervals, usually dependent upon the lifespan of the previously elected person?

4. Artists – What post-impressionist painter has been referred to as “the father of us all” by artist Matisse and Picasso with his most expensive painting – “The Card Players” – selling for more than $250 million to the royal family of Qatar in 2011? Here’s a pic of some of our brainstorming (please note that not one of these artists is the correct one): ⇓ 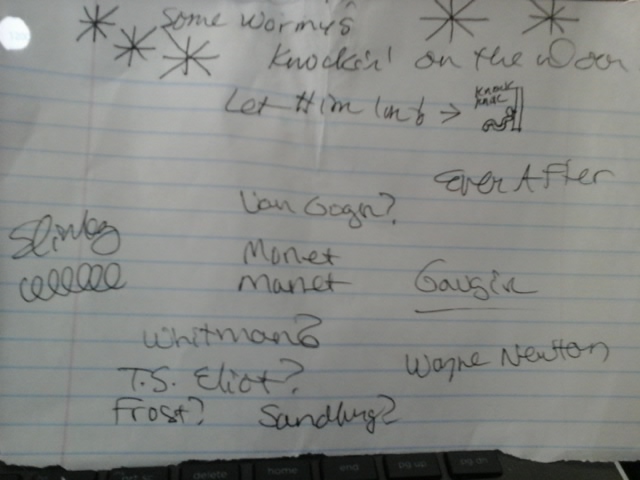 The little drawing at the top was not inspired by any trivia questions, but by a Paul McCartney and the Wings song that was playing before the game started…

5. Spanish – What is the Spanish word for a girl celebrating her 15th birthday?

6. Proverbs – The phrase “Good fences make good neighbors” is derived from the 1914 poem Mending Wall, which was written by what American poet? Good guess by Mike, who later whined that he wasn’t contributing enough in the game (LOL)!

7. Singers – What singer has had the nicknames “Midnight Idol” and “Mr. Las Vegas?”

8. Fairy Tales – What 1998 film starring Drew Barrymore and Angelica Huston is a retelling of the “Cinderella” story? Did you know film director John Huston was notified via telegram of Angelica Huston’s birth while he was filming The African Queen?

9. Cities – What Irish city was established by Viking raiders in 853 and is associated with the glass making industry? FB clue.

Mystery – Progressive (who, what where)

Four clues given – the sooner the correct answer is given, the more points are awarded (ugh these are always death)!

M2 – I received only one Oscar nomination – for best makeup – and won one Golden Globe for best actor in a musical/comedy.

We had it figured out by clue #3, but didn’t manage to turn it in on time…so only two points for this round.

Among head coaches whose teams have won more than 45 games in the NCAA Division I Men’s Basketball Tournament, six of them have coached only a single team in that tournament. Other than Duke, name three of the other five schools.

We managed to get one school correct…but wagered zero.

1. Companies – In September, 2018, what healthy habits and wellness company announced a rebranding with the company changing its name to WW International Inc.?

2. Novels – What 1897 novel follows the title character as he attempts to move from Transylvania to England? For a nerd bonus point, what is the name of the novel’s primary antagonist? Mike and Evan were engaged in a debate as to what “antagonist” meant in this novel’s case…one of them was correct – and the other was not – but we turned in the wrong guess, so no nerd point for us (these things happen)… And some more brainstorming for you! ⇓ 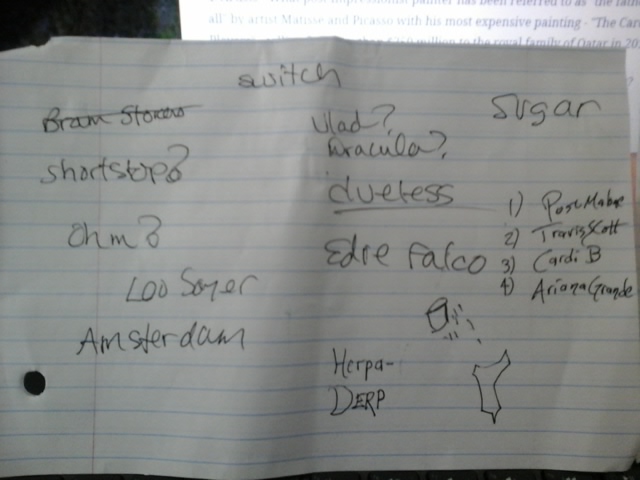 3. Statistics – In baseball, what does the letter “S” stand for in the abbreviations SH and SR? Our only miss of this whole round besides that nerd point from question 2…

4. ’90s Films – What 1995 film starred Alicia Silverstone in her breakout role and was based upon the novel Emma by Jane Austen? 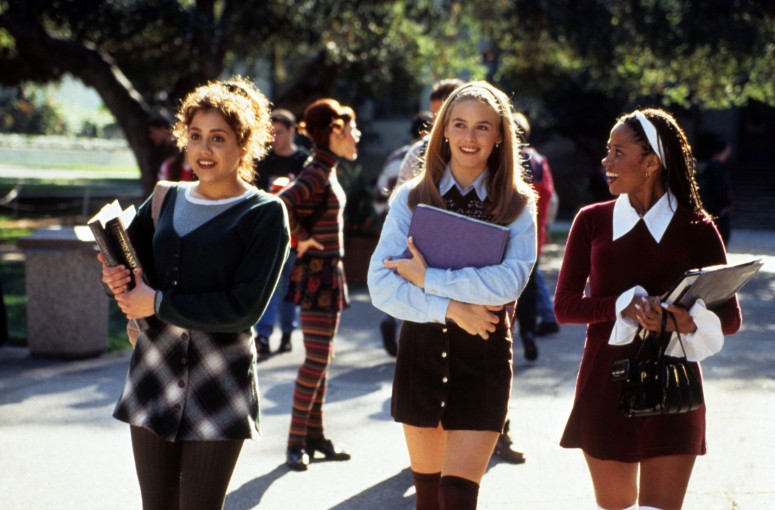 On a scale of 1 to 11, how jail-baity were THESE outfits? This movie is such a guilty pleasure for me, probably because I speak fluent “Valley Girl,” LOL! So sad that Brittany Murphy (on the left) died in such an untimely and bizarre way.

5. SCIENCE! – What SI-derived unit of electrical resistance is named for a German scientist who also lends his name to a law that describes the relationship between current voltage and resistance?

6. Islands – Hatteras Island – home to Cape Hatteras – is located in which U.S. state? And Mike thought we wouldn’t need him….Actually I would’ve known this too, but he wanted to have this answer all to himself!

7. Country Music – Audio clip of a country song that recently spent more than a week on the Billboard Country Airplay charts…Evan came up with the right guess (though he didn’t quite spell the last name correct…thankfully the host didn’t ding us for shitty spelling)!

8. New TV – Who stars as the title character in the 2020 series “Tommy” and has won Primetime Emmy awards for roles on “The Sopranos” and “Nurse Jackie?”

9. European History – In what European city did Anne Frank and her family spend two years hiding during World War 2?

10. Compounds – Stevia is a compound that is designed to replace what food product in recipes?

The two “millennial” players knocked this out of the park for us (nice work)!

Scores – Nine teams, scores 47 to 62 with us in first playing under the name “I Need T.P. For My Bunghole.” Yes…we are really mature and are still amused by the antics of Beavis and Butt-Head…

Our Couch Pulls Out But I Don’t was right behind us with 59.

“Hail, Columbia,” a song written by Joseph Hopkinson and Philip Phile, is, as of March 2020, most closely associated with what man?

This song also appears on the soundtrack for the 1999 film Ravenous, which is one of my favorite movies – and I also own the soundtrack. So while I was reading about this movie’s trivia – and soundtrack – I learned this little fact about “Hail Columbia.” And now I think of it as the “processional march for second bananas.” #welcometomyweirdmind #itsaniceplacetovisitbutyouwouldntwanttolivehere

A scene from Ravenous.

We’re done with trivia for the week! We’ll be back out next week, barring any illness, quarantines, natural disasters… As always, Go Pods, and stay classy, Paul Cezanne!