My “old man” and I decided we’d challenge ourselves this Christmas and go to a local shopping emporium (known primarily in the U.S. as a “mall”) to buy Christmas gifts for each other. Our “goal” was to spend no more than $30 on each other, split up, and attempt to seek out gifts for each other within a semi specified slot of time – designating a “meeting spot” at the end of our respective adventures. We don’t both carry cell phones, so we kind of kicked it old school in this regard!

I do not own this photo and did not take it…but this is pretty much Briarwood Shopping Center in Ann Arbor, MI.

Since my husband doesn’t follow this blog unless I share links to specific blogs for him to read, I’ll share what I bought for him here! But I’ll get to that in a bit…

Our “shopping emporium” today was Briarwood Shopping Center in Ann Arbor, MI. Aside from the Sears wing being mostly closed, I wouldn’t describe this as one of those dying malls you’ve probably read about.  Maybe you even have one of these dying malls in your neighborhood! Big anchor stores empty – or filled with two or three other smaller vendors. Today, business seemed to be hoppin’ at Briarwood Shopping Center – you’d be hard pressed to find an unclogged pedestrian artery on this day – one of two of the last weekend shopping days remaining until the “Big C.”

So Mike and I designated our “meeting place,” and departed on our separate ways…

Before I get into some more details about today’s shopping, allow me to clarify a couple of things… One, though I wouldn’t describe myself as a “shopper,” I do have above average “store skills.” I can fairly easily navigate any store in which I enter and find – or not find – what I’m looking for. My husband, on the other hand? He’s a complete “non shopper.” He’s had me to pretty much be his personal shopper throughout our whole marriage. This statement about him is an important plot point…

So I was off to the races! One of the first things I was looking for was a new keychain lanyard, and possibly a new pair of winter gloves for him. I went into Macy’s first – and learned the hard way that all of their men’s stuff is now on the second floor. It’s been quite a long time since I’ve shopped for anything at Macy’s! Hell, I remember when women’s lingerie used to be upstairs, and remember when men’s merchandise was downstairs!

So I took the elevator upstairs, and found the cold weather accessories (retail lingo for winter gloves, hats, scarves, etc.). Knowing that him and I have virtually the same sized hands, I even tried on a couple of pairs, and was scared off by sticker shock on a couple of other pairs. I struggled a bit to get one of of the pairs on my hands, so I rejected them. My dear husband has some arthritic issues with his fingers/hands, so if I was going to struggle with putting on the gloves, then so would he! So I looked in vain for a “men’s gifts” department to see if anything would grab me. I wound up just heading back downstairs and continuing my search for a keychain lanyard.

As I was walking down one of the corridors, I spied a Hickory Farms kiosk. Score! I knew that Mike used to love the Hickory Farms gift sets, so I checked out the offerings, and found one that he might like: 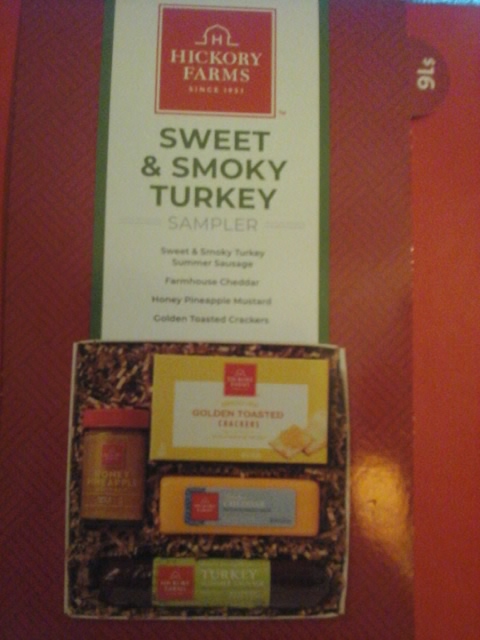 Neither of us are pork eaters…

I went into what I surmised was some kind of skateboard shop after this, which the Briarwood directory tells me might have been called “Zumiez.” Score – they had lanyards hanging behind the counter! Not score – they were all imprinted with the words “Virginity Rocks.” Uh, no – that’s not a sentiment that my husband would appreciate! He’s 47, not…14.

I decided to backtrack a bit and went into Hot Topic. Yes, they had lanyards too! Sadly, they were all themed lanyards – none of them with themes he would like. Has Batman become chopped liver? Were you sold out of Rick and Morty lanyards? For f—s sake, you don’t even have Nightmare Before Christmas lanyards?

I was starting to get a bit discouraged, then I spied the Vans store. Yes! They had lanyards! And they weren’t imprinted with something espousing the abstention from sex – and weren’t cheesy!

You can’t really tell from this picture, but this is a detachable lanyard. Simple checkerboard pattern – this is way more stylish than the raggedy ass lanyard he’s using now – and more practical.

The store staff at Van’s was actually quite good! They had a good laugh when I told them about the “virginal” lanyards I saw at another store, and were also amused that my husband and I were shopping for each other at the same time – in the same mall.

I wanted to pick up one last thing, so I went into the store in which I work…(not revealing the name of that store in this blog). It’s a department store – that’s all I’m gonna say. I knew he needed some socks that are easy to put on, so I found some “non binding” socks and used one of my $10 rewards. So with my discounts – I bought two packages of socks (two pairs each) for under $9. I’m not expecting his face to light up when he sees that I bought him…socks – but I’m his wife, and it’s almost my “duty” to buy his socks from time to time. 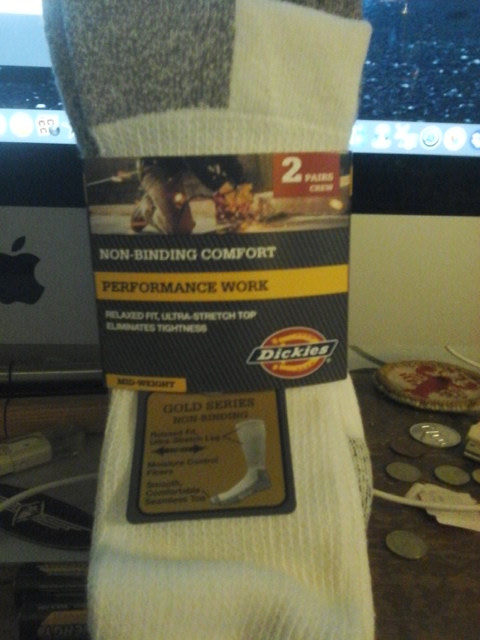 What could be a more exciting present than socks? 🙂 More about socks in a bit!

So I made it back to our meeting place, and there Mike was…sitting on one of the benches. With nothing! What went wrong? He had a grumpy look on his face, and I had to investigate…

“No, because I saw you were going in there, and I didn’t want you to see me.”

Long story short, I would thusly accompany him into Macy’s and help him locate the department of one of the items I suggested he try finding for me (while keeping a distance so I wouldn’t see what he was buying). This time around, he didn’t end up empty handed! All I know is he went into the area where socks are sold (I actually don’t mind getting socks as gifts as long as they’re cute and fit me).

I would later learn that he actually saw a couple of things – in the store in which I work – that I might like. I said I’d give him my discount card if he wanted to go in some day next week while I’m working (he’s going to be driving me to work on one of my work days so he can run errands with the car while I’m working – we share one car).

He wanted to get something else, so we went drove back to our ‘hood of Ypsilanti, MI. He went into a gift/novelty store called “The Rocket,” while I chilled out in a nearby brewpub called the YpsiAlehouse. I proceeded to sip on a beer while he finished his shopping. I kind of lounged a bit- stretching out my legs out on a chair.

While in the midst of this, a beer brewer of my acquaintance elbowed me and said, “It’s not that bad, is it?”

I knew this guy was used to seeing me in that bar with my “better half,” so I gave him a story…

“Mike’s out shopping for a Christmas gift for me right now. When he gets back here, I’ll buy him a beer. Sometimes you’ve gotta buy a beer for your man.”

And that’s indeed what I did! I wound up having three rounds of a “session IPA” (low alcohol IPA), and he had two rounds. It was a nice way to top off a day of (ugh) holiday shopping! Cheers to that…