Winning a trivia tournament spot today was kind of a nice way to top off what had been kind of a crappy… week. Not only in terms of work and all of its annoyances (exacerbated by this being a very a busy time of year), but because we also had two subpar trivia games earlier in the week without prizes. We used an all-new lineup of players today including “regulars” such as myself, my husband Mike and our best “mate” Brad, and added Phil from the rival trivia team More Beer Less Pants. This wasn’t the first time that players from that team, which we’ve known for several years – have backed us up in trivia. We greatly appreciate the spirit of camaraderie we’ve encountered over the years from not only their team –  but other trivia teams as well, which have supplied us “helpers” numerous times! Occasionally players from our team also get called upon to help other teams in need, so it’s always nice to return the favor!

Other teams besides ours advancing at Tower Inn today included Awesome Sauce (who moved up from last to first – getting the final question correct), Better Late than Pregnant, and team “Pants,” the last of whom were our friendly rivals for a couple of years at The Wurst Bar. They were indeed the winners of the “ugly sweater contest” (if there is such a thing as “winning” such a contest)! We will return to the Library Pub in Novi next Saturday to see how we do in a REAL trivia battle against the best of the best all vying for a $2,500 first place prize and trivia “street cred.”

And here are the questions, please assume they are all very abbreviated (I think you all know the drill by now)! 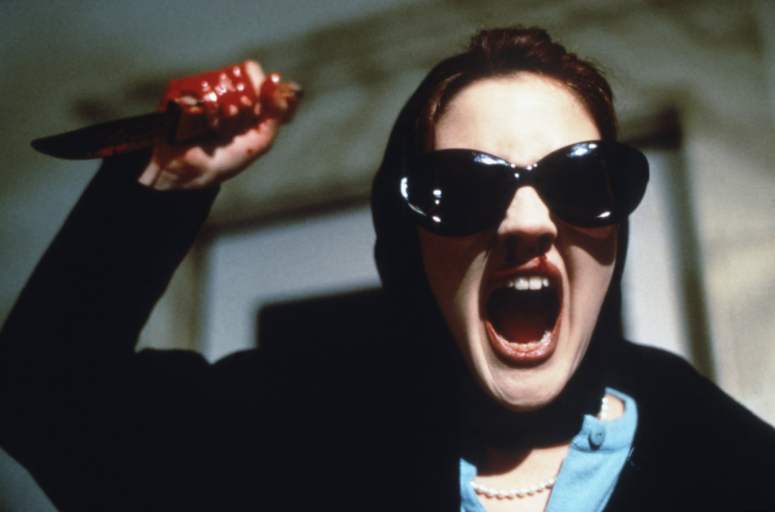 3. Government – What independent government agency has been losing money since 2007 and is currently operating at a loss?

1. Famous Photos – What creature was featured in a 1934 Surgeon’s photo that later proved to be a hoax? 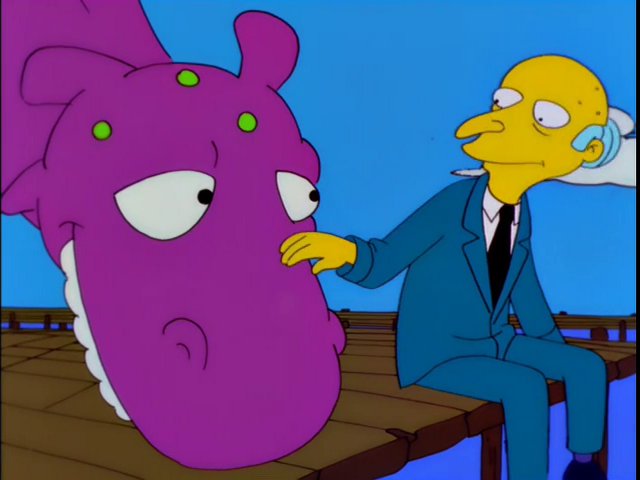 This creature made an appearance on The Simpsons.

2. ’90s Movies – Of the colorful nicknames of the diamond heist agents in the 1992 film Reservoir Dogs, which was the only colorful name that was also a primary color? Teamwork here…thank goodness that unlike me (who said this is the ONLY Quentin Tarantino movie I’ve never seen once let alone several times like all of his other movies except that  new one which I haven’t seen yet), Phil was able to “deduce” which guy this was from our list of colors. Bam!

3. Around the House – In a house, a butler’s pantry is a service room between which two rooms? Considered the right guess, but overthought this…Alfred from Batman would probably cluck his tongue at us for missing it…But wouldn’t Alfred’s “butler’s pantry” be somewhere near the “Bat Cave?” Miss for 1.

1. Today’s TV – Airing more than 400 episodes since 2011, what “clip” show featuring the viewing of online videos is hosted by Rob Dyrdek and co-hosted by Sterling “Steelo” Brim and Chanel West Coast? Miss for 1.

2. Marches – Named Entrance of the Gladiators, what march is now more commonly used to introduce what “entertaining” performers? Dang, I was hoping this would be about my man John Philip Sousa (aka “the March King” – don’t get me started on how Stars and Stripes Forever is essentially one of the most perfect songs – let alone marches – ever composed) or about what march is used as the processional for the vice president of the U.S…. but it doesn’t matter, because Brad was all over this for the points…(nicely done)!

3. Dr. Seuss – Of the 50 different words used in the Dr. Seuss book Green Eggs and Ham , what common trait is shared by the other 49 words?

That first question was our only miss of this round…

Given the country name, identify from which country they declared independence (I’m sorry to say my favorite island nation Mauritius, aka some people call it Maurice – which is true look it up – was not one of the countries they asked about).

Our “fourth” guy was a great help here by knowing more things about Bangladesh than us (other than it has a crap ton of people, some Levi’s jeans are made there and it’s very, very floody). Got all of these for 10 points! My only real contribution on this round was knowing the first two – and saying, “guys from Chile are super hot.” I have TWO things on which to base this opinion – the doomed 1974 Chilean World Cup football team (aye caramba) – and Pedro Pascal, whom I just saw in Kingsman: The Golden Circle. That…high-tech lasso (that’s all I’m gonna say about that)! Yes, manners may maketh man, but high tech toys and fighting skills don’t hurt, either! 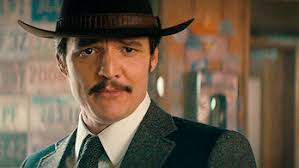 Pedro Pascal as “Agent Whiskey” in Kingsman: The Golden Circle. One of a few reasons men from Chile are…hot!

We were in first out of 12 teams at the half with 35 points, with Better Late than Pregnant right behind us with 32 and Too Easy behind them with 31.

1. Sports Movies – In the 1976 film Gus, the plot centers on what kind of animal being used as a football place kicker? Not a single one of us had ever heard or or seen the movie, but we still made the correct guess…

2. Human Body – If someone is suffering from logorrhea, they are most likely looking to control what body part? Fourth man helped us again here by knowing what the word “logo” means (fist bump bro)!

3. Geography – Crna Gora, located in the southern portion of Eastern Europe, translates to “black mountain” which is what country’s name in English?

1. General Knowledge – In 1971, which Union Civil War general became the first president of the National Rifle Association? A lot of discussion, but none of the general’s names we threw out wound up being correct (no teams got this correct).

2. Getting Inked – What image was found to be the most popular tattoo image based on 20,000 Instagram posts? We were torn between two possibilities including the correct one, but we picked the wrong one…

3. Early TV -Which comic writer/actor pioneered the 1950s show titled Your Show of Shows, which is considered to be one of the first “variety” TV shows? Our “elder statesman” Brad for the hit here (even though he misspelled his first name on the slip)!

1. Constellations – In terms of square degrees, what is the largest constellation in the sky? Miss for 6…not very “stellar” (ouch)!

2. Current Music – What is the more popular stage name of DJ Christopher Comstock? There was a lot more to this question than I’m including here, miss.

Scores heading into the final…

We were initially in first until a team right behind us decided to ask that an answer that they had gotten incorrect be reviewed…and Stacy ruled that more than one “body part” would be accepted as answers in the round four “human body” question. So they moved to first heading into the final (but only by three points). We had 53 points heading  into the final, they had 56 points.

As seen in 2018 admissions data, what west coast college reported to the U.S. Department of Education as having the highest number of applicants with more than 100,000 in a year and only a 16 percent admission rate – making it the most applied-to college in the country?

We initially had the right guess, than talked ourselves out of it, but we wagered low enough to make the top four (whew – was THAT a nail biter)!

And that’s it for this week’s trivial pursuits! We’ll be back at it next Wednesday. As always, Go Pods, and that person sitting at the bar with logorrhea!