Australia and its surrounding areas are home to some of of the oddest animals on the planet, and the Thylacine was no exception. It was striped like a tiger, had characteristics similar to a wolf/dog and had a pouch in which babies were gestated – just like kangaroos, koalas, Tasmanian devils, opossums and wombats. It is thought to have gone extinct in 1936, though there were reports of Thylacine sightings as recently as the mid 2000s (none have been officially confirmed). It was native to Australia, Tasmania and New Guinea. Their numbers dwindled when they were hunted (bounties were offered for their kills) with human encroachment and disease also contributing to their ultimate demise. 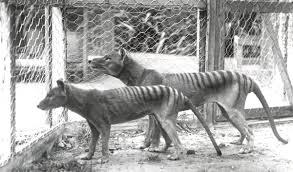 Thylacines were more commonly referred to as Tasmanian wolves or Tasmanian tigers.