We took a little “side” trip to the Indiana Dunes area today to see if it could offer anything to impress us. It did not. Hard to beat Michigan’s towering, majestic sand dunes… 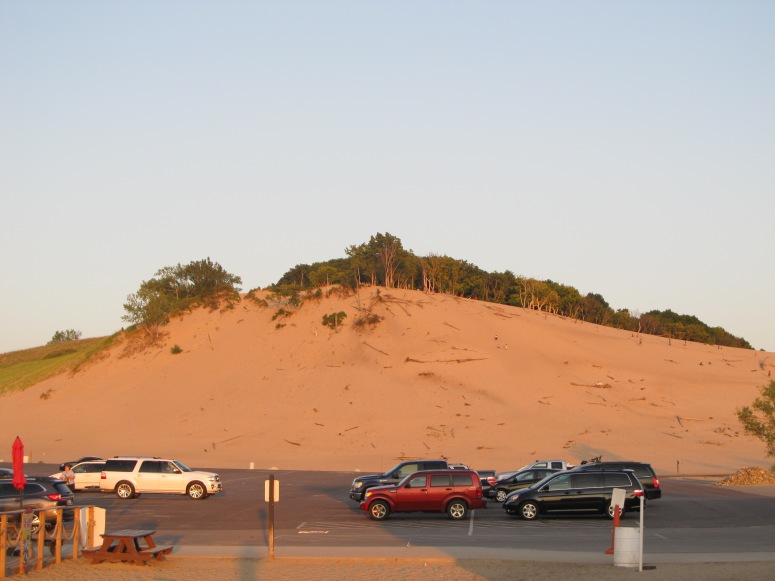 This dune’s name is “Warren.” In fact, all of the sand dunes at Warren Dunes State Park on Michigan’s west coast are named “Warren” (JK)!

What did impress me, however – was the go-getting employee at the Indiana Dunes Visitor Center! She saw us looking at a map and she was a Janey on the Spot for helping us plot out a quickie tour! We didn’t even ask for her help, but she did! Kind of reminded me of Leslie Knope…

Leslie Knope would probably approve of the waffles we had for our “free” breakfast at our motel this morning (though no whipped cream. The coffee, not so much…hot brown water with essence of coffee. I swear it was either decaf in caffeinated coffee clothing – or just not caffeinated enough for me. A coffee stop at a truck stop took care of that! Serving non-caffeinated coffee to truckers is a killable offense! I had mine on ice with just a little splash of half and half (so good)!

I did see two signs along I-94 in Indiana that piqued my interest. Yes, I’m kicking myself for not taking photos, though “drive by” photos don’t always turn out anyway: 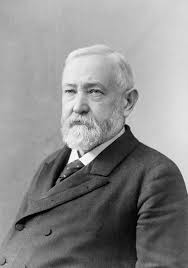 Is it really that hard to picture him in a muscle T-shirt, reflective shades and a ball cap? He’d fit right into an Indy 500 viewing crowd!

#1 – The “Welcome to Indiana” sign mentioned U.S. President Benjamin Harrison. I thought…WTF? I know he wasn’t born in Indiana, so I let the Google machine tell me a bit more about why Indiana was trying to “lay claim” to him. I get it, Michigan tries to “lay claim” to Gerald Ford, too since he attended the University of Michigan (he was born in Omaha, Nebraska). Turns out even though Benjamin Harrison was one of five U.S. presidents born in Ohio, he was “somewhat” involved in Indiana politics, having unsuccessfully running for governor. And then he bought a home in Indianapolis, so he’d be close to the Indy 500 (just kidding about the last part, though he probably would cop a “When in Indianapolis” attitude had he lived long enough to see the Indy 500 become a thing). Maybe he’d charge $50 a car for people to park on his lawn?

#2 – Billboard advertising a vasectomy clinic. “Get one side done, get the other side done free.” Now that HAD to be a joke! Who would get a “half vasectomy?” Installment plan vasectomy? “I’ll get the other nut done later after I get my holiday bonus at work, sweetheart  – we’ll just do thoughts and prayers that we won’t get pregnant til then.”

How nice it was to be back in our own state after that lackluster brief jaunt into Indiana! Construction pylons as far as the eye can see…billboards for Lion’s Den stores every few miles – and semis, semis, and more semis! Home sweet home!