Thursday afternoon, my husband and I painstakingly navigated our way to a place we thought we’d be camping for three nights – a place called Tippy Dam Recreation Area near Brethren, MI. It’s located roughly between Cadillac to the east – and Manistee to the west – southwest of Traverse City.

Complicating our navigation was a posted detour, which took us probably about a dozen miles out of our way! Kind of an insult to injury, since the lovely Manistee River (Michigan’s fourth longest river system) already makes you….circumnavigate her a bit – before you get to see her.

The best route to take if you want to stay on “good” roads is to take High Bridge Road to Coates Highway – which heads east out of the little town of Brethren (on upper left hand side of this map). I was excited to learn that Brethren had a “party store” (Michigan speak for convenience store that sells booze) selling “good” beer (I saw a guy walking out of the store carrying a 24-pack of Founders All Day IPA and a 12 pack of Bud Light…pure Michigan)!

So we got to our site, set up camp, made dinner – which was boiled hot dogs, fresh veggies, trail mix, and cold water from the cooler.  We had a pretty darn nice evening! We took a short drive to a river access site so we could get a close up view of Ms. Manistee…or shall I say Madame Manistee? Yeah, I think “Madame Manistee”  commands far more respect…

Me and “Madame Manistee.”

Later, we had some ice-cold drinks (which hit the spot since it was so warm and muggy), and Mike managed to get a “bit” of a fire going with some stray logs/twigs he found on a neighboring site.

Though it was muggy on that evening, it wasn’t too buggy! Until the rains came during the night…

Friday morning, I was just starting to think about cooking up some breakfast, when my husband said: “We have a problem.” He had been talking to the ranger, who said he had no documentation of us having a reservation on the campsite. We drove down to the registration booth, and he asked us if we wanted to move to any one of two other sites that were available. We decided to just pack up our camp and…see where the road took us. We decided it was time to check out a public beach in Manistee. Though the water was too cold for us to stay in for too long, the beach was still a nice place to have a picnic – and use the WiFi to find out what the Hell went awry with my camping registration! Turns out I put in the dates June 28-July 1. Oops?

Fifth Avenue Beach in Manistee, MI. It was nearly as rough to get to as the campground itself – because of a lake channel right through the middle of town. But we found it without GPS…

Looking back – it was good that the ranger kicked us off our site, but we wouldn’t fully realize it until later. We decided we’d see if we could find lodging for the night in either Manistee or Ludington about a half hour south. Even a “mom and pop” roadside motel in Ludington only had one room – a “deluxe” room with three beds – with rates starting at $190 a night! Peak season, Friday night, resort town…go figure. We decided we’d mosey on home – but didn’t feel good about it. I was really upset with myself for screwing up the camping reservation – though my husband, strangely enough, was not.

We had three cold hard seltzer waters in the cooler from the night before, and I decided I was going to have one in the car – in a vain effort to calm myself down (I wasn’t driving). It actually not only calmed me down a bit – but gave me some liquid “courage.” As we meandered eastward on M-20 toward U.S. 131, I thought of another option that didn’t involve driving home that night. Something better than ending our vacation two days early – and ending our vacation after battling rush hour traffic in Grand Rapids/Lansing. Taking “surface roads” is nearly as irritating as the highway – when you have to slow down for all of the small towns – or get stuck behind a semi going 40 miles per hour for 10 miles….or more.

So what was that other option? Give the in-laws a call. Desperate situations call for desperate measures? I gave them a call, but got the voice mail. Didn’t feel like leaving a voice mail. Father in law called right back. And I got right to the point…

Do you have room at the inn for us to stay tonight?

Yes, of course, he said! We agreed to meet at a bar near their house called the River Junction, where Mike and I would have dinner….and some drinks!

River Junction in Hersey, MI does happy hour from 11 a.m. to 6 p.m. Sunday through Thursday – and 4 to 6 p.m. Friday. But even outside of happy hour the pitcher prices of Bud Light are only about $6! Like many other “Up North” bars/restaurants in Michigan, they also do a Friday night fish fry (theirs is all-you-can-eat).

So we got some dinner and some drinks…and headed back to our “lodging” for the night, which is in a finished room attached to the in-laws’ pole barn. Doesn’t sound very luxurious, but it has two twin beds, a space heater for the cold months, a fan for the warmer months, electricity and most importantly? A quiet place to sleep in! Before they had this “Fonzie Room” (my name for any living space attached to a garage because of the TV show Happy Days), we had to sleep in their loft, which did not have a door…and allowed us to hear all noises at all hours. And gave us no privacy. We’ve come to really, really appreciate the “Fonzie Room” when we come to visit them! The cats are always trying to sneak in, but we don’t let them (allergies afflict the both of us). There is no bathroom, but if you “really” have to go, their house is not too far away. For other instances, well – the lawn could always use a good watering, right? 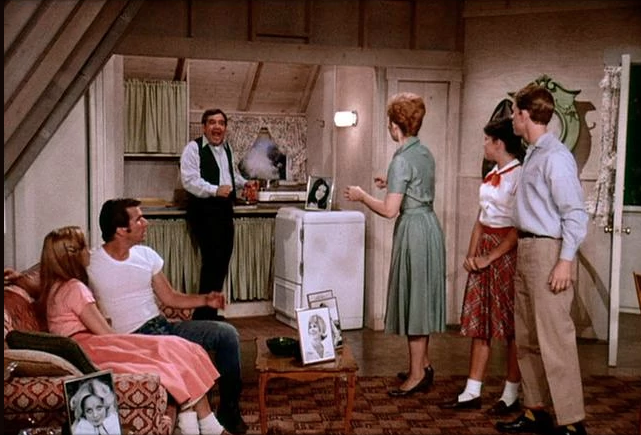 We enjoyed a nice evening on their deck overlooking the Muskegon River (second longest river system in Michigan after the Grand River). Their cats and dog, as always, provided much better entertainment than the television!

India the kitty was so spooked by thunderstorms the next day!

After going to bed, we began to realize how happy we were to NOT be camping on that night. Thunderstorms…torrential rain, lightning. Even if you have an RV or are using a rental cabin, or have the best rain shelter/canopy in the world – a camping trip in the rain is none too fun! The thunderstorms/rain continued all the next day, and even knocked out the WiFi at the in-laws’ house. So no Netflix – and no blogging! I read a series of articles published in 1999 about the Muskegon River watershed from the Muskegon Chronicle. Some things sticking in my mind? Man-made dams are generally bad – and cost more to keep up – than to demolish. Also the lumber industry did quite a lot of damage to Michigan’s rivers – especially the Muskegon.

On our drive home Saturday, the storms…continued. 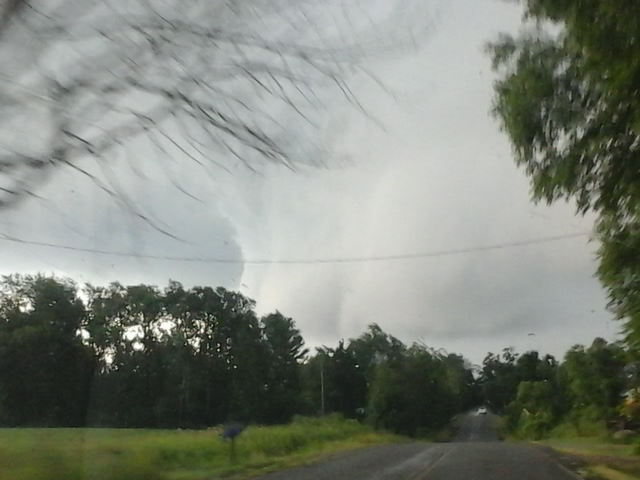 In this last pic, you can see the edge of the storm front. This was taken along M-20 heading east into Mount Pleasant. The Chippewa River in Mount Pleasant burst after heavy storms in the summer of 2017, which caused extensive damage to buildings in the town, including many campus buildings.

Then when we got home, the rain stopped – and the heat/humidity increased almost immediately. It was almost as if we’d never left the house!