I’ve brought along a camera on a lot of my recent walks and have subsequently seen nothing “shotworthy” on a good number of those walks. Today, I took a 2.6 mile walk of about 40 minutes in duration (which I’m stating for my “fitness log” purposes) and what should I see on my return trip home in a retention pond? 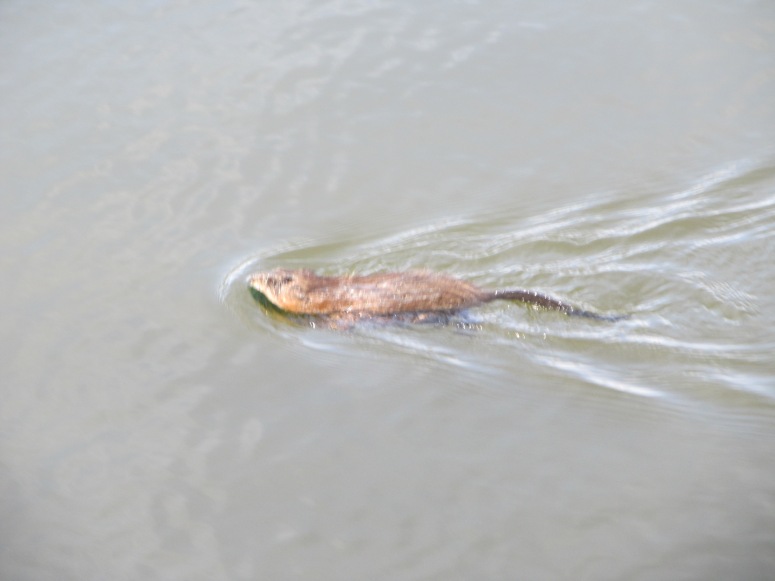 A photo of a muskrat from a walk I took in March.

A muskrat. A brown, furry, obscenely cute – muskrat. All I had with me was my camera that lives inside my phone, and since muskrats are kind of timid creatures (probably because they are delicious), I wasn’t able to get close enough to get a shot with my camera phone without scaring the poor little bugger. It wound up swimming off under the water after it caught a glimpse of me. Too bad it had NO idea that I would do absolutely nothing to harm it! Its tiny rodent brain just thought to itself:

OMG there’s a lumbering human staring at me! It probably wants to eat me! I’d better vamoose!

What? You didn’t think “vamoose” was part of a typical rodent’s vocabulary? Of COURSE it is! They also like to say “skedaddle!” (JK)

Had I brought my “real” camera, I would have been able to zoom in from a distance and get a halfway decent shot.

Next time, muskrat! Next time you’ll be on candid camera!