We’ll be doing a trivia “double header” tonight! Which does not mean anything like what you’ll see in the below image from Futurama: 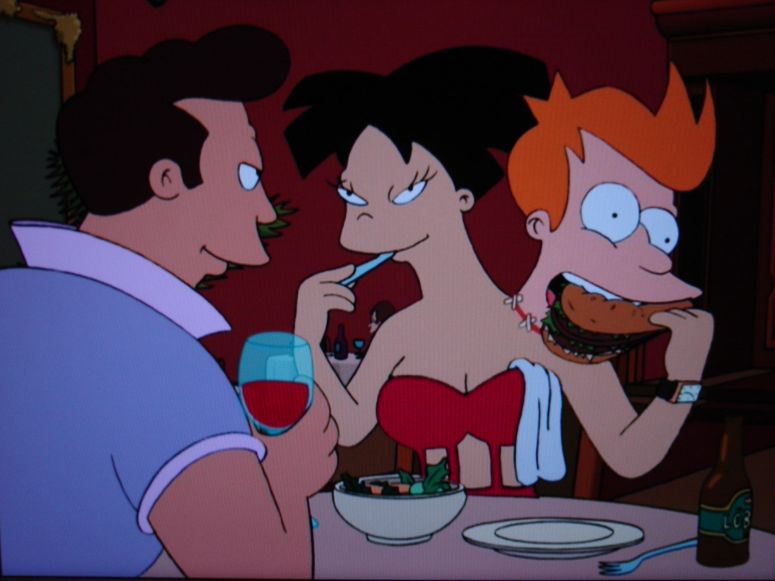 In this Futurama episode, Frys head is grafted to Amy’s body following an accident. Here, Amy (whom is very promiscuous) is on a date  with the man in the blue shirt, and Fry is..eating tacos.

To start things off, I have a three-person “away team” for the Star Trek theme trivia night at Haymaker in Ann Arbor (me, Mike and Brad).  We’ll be using the team name “Shut up, Wesley.” I’ve been doing quite a bit of “studying” for this theme night, but honestly – Star Trek is a HUGE trivial universe! I’ve memorized the names and subtitles of all of the Star Trek films in order, know what VISOR stands for,  I’ve been looking at box office grosses of films, series run dates for the various TV series, which Academy Award winning actors have appeared in Star Trek films/TV episodes, which actors have appeared in the most episodes of their respective series, various “oddball” facts such as which Star Trek film was the only one to win a Saturn Award for best sci-fi film, which original Star Trek cast member “created” the Klingon language, where the word Ferengi is derived from, know the Ferengi word for “captain,” know which two Star Trek characters are named for a real life person whom Gene Roddenberry knew, which Star Trek cast member has been called the “First Lady of Star Trek,” plot descriptions of the various films, captains’ names and other crew member names, reading the trivia entries on imdb as well as wiki articles and even watching reruns of Star Trek: The Next Generation. I’ve tried “assimilating” a lot of knowledge, let’s hope at least a BIT of this will be asked about tonight.

This ain’t my first rodeo, and it’s NOT the first trivia theme night I’ve “crammed” for! I prepared quite a bit for the ’80s movies night we played last summer, and as luck would have it, my studying of high-grossing ’80s films paid off (which was the subject of the final question). I immersed myself heavily in comic book “lore” a few years ago when we played a “comics” theme night, and a lot of that knowledge is still residing in my brain today and will occasionally help me answer trivia questions (plus it helps that I’m married to a nerd…and hang out with a few nerdy folks). Speaking of nerdy folks… 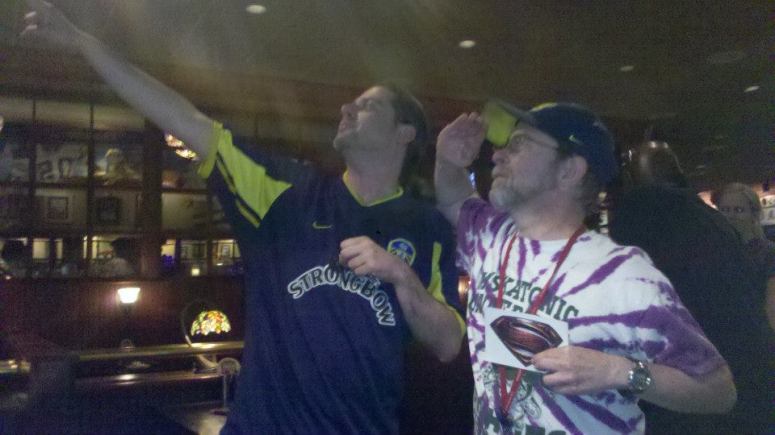 My teammates Mike and Brad doing their best imitation of…someone looking at Superman, and displaying prize “swag” from a theme trivia game in June, 2013. Not pictured – Superman tank top, which was MY prize pick (I was the one who nailed the final question about ages of actors playing Superman, so I got the best piece of “swag”).

My “mission”  tonight is for us to finish in at least the top 25 percent of teams playing. I’m not expecting us to win any nerd contests tonight! I’m convinced that this theme night will NOT be a “Kobayashi Maru” (aka unwinnable scenario)!

After the Star Trek game, we’ll depart in our “shuttle” and rendezvous with our fellow crew member Evan on another “away mission” at Sticks in Ypsilanti. Our mission will be to…win beer money!

What does this all of this mean? I’ll have TWO trivia recaps to post on Friday!