There’s nothing quite like a “name that tune” night to take you on a trip down memory lane! Even if the memories belong to someone else (more about that later)! Think about how particular songs (for good or for bad) became the soundtrack of your life – whether they were played at your wedding, were popular when you were in high school, were your favorite college “jams” or were being played on solid-state stereo equipment and on record players in your family’s home.

I have no idea what I am listening to here, but would you LOOK at that solid state stereo equipment? Pardon me while I drool a little! This is me in…I think…1973. Not yet toilet trained judging from the rubber pants. Note the shirt, which was probably a hand-me-down from my older brother!

If you grew up in a house with record players, your mom likely warned you, “Don’t bump that record, sweetie.” To get around this little dilemma, my dad (electrician extraordinaire that he was) put in speakers in our basement – so we could listen to records downstairs and stomp around as much as we wanted! Ah, that red shag carpeting…was there any other kind of carpeting besides shag in the 1970s? We also had outdoor speakers, so we could listen to music while we were in the back yard. I remember riding my bike in the neighboring subdivision and being able to hear my brother blaring a J. Geils Band song on the outdoor speakers! I think it was the song “Rage in a Cage.”
Kimberly and I wound up teaming up very well on this “Face The Music” night served up by My Trivia Live at the The Plymouth Roc, though at first, she was starting to look like a hit solo artist! I’ll do my best to convert as many of these audio clues into questions as I can…
Round One – AUG – All correct answers will begin with letters A, U, or G.
1. Who got his start by NOT winning American Idol? He finished as runner-up in the eighth season.
2. What TLC song spent three weeks at #1 on the Billboard Hot 100 charts in 1999?
3. What artist recorded the early 1970s hit song “Dream Weaver?”
Kimberly knew #1 and #2 easily, we put in an incorrect guess of Dobie Gray for #3.
Round Two – All correct responses will begin with U, S or T
1. What old-school rap group consisted of Kangol Kid, Educated Rapper, Doctor Ice, and Mix Master Ice? The group’s best-known single is “Roxanne, Roxanne.” Miss.
2. A group who released the 1983 album “Frontiers” had this song, with the following lyrics, as its fourth hit single:
It’s been so long
Since I’ve seen her face
You say she’s doing fine
I still recall
A sad cafe
How it hurt so bad to see her cry
I didn’t want to say good-bye (song title comes after these lyrics)
3. What British artist recorded the hits “Dynamite” and “Break Your Heart,” which were tracks on his 2009 album “Rokstarr?”
Missed #1 and #2 in this round.
Round Three- All correct responses charted in the month of August of their respective years
1. This song topped the British charts in the early 1970s with these lyrics:
“Well you’re dirty and sweet
Clad in Black
Don’t look back
And I love you
You’re dirty and sweet oh yeah.”
For a bonus point (not offered in the game, this is just me dreaming this one up), which 1980s “super group” recorded a cover of this same song, reaching #9 on the Billboard Hot 100 charts? And with this came a memory of a 2003 Halloween party in Taylor where my friends and I dressed as characters in two different music videos. We went to a bar in Taylor that was a real “meat market,” lol…there was a woman who did a “lizard woman” costume and had scales airbrushed over her (barely clad) body. 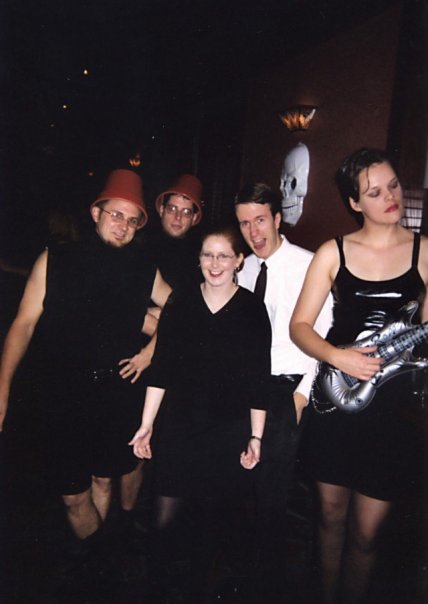 This is the only photo that exists from that 2003 Halloween party. And this is most likely a snapshot. In “pictures or it didn’t happen” news, I am wearing MAKEUP in this photo! IKR? Getting my hair to slick down like that took quite a bit of work…and product. Here, we are doing both a Devo and Robert Palmer entourage ensemble. Robert Palmer died the previous month and I wanted to do this costume as a tribute. The rather binding, uncomfortable get-up with (ugh) nylons was a worthy sacrifice to the late singer 🙂 We went to a Hooters afterward, and by then I think I’d already ditched the most uncomfortable components of that costume!

2. What artist recorded the 1980s hit “La Bamba?”
3. What German dance group’s best known single is the 1990 #2 Billboard hit “The Power?”
Got all of these…
Halftime – all about Leos (all artists have Leo as their Western zodiac sign) – Most of these were quite easy, I’ll just include the ones easiest to do as “written” clues
1. Singer best known for being part of a group who recorded “In The Mood” as a solo artist in 1983, peaking at #39 on the Billboard Hot 100 charts
2. Name of lead singer of Alice In Chains
3. Name of Grateful dead lead singer
4. Name of singer who recorded “She’s Like the Wind.”
We had 29 points going into the second half, and were tied with another team for second. We used the name “Whore Island Glee Club.”
Round Four – All correct responses will be related to the word “birthday”
1. Artist recorded the 2013 hot dance track “Birthday”
2. John Hughes film in which you would hear the new wave track “Happy Birthday” by Altered Images
3. Name of group for which Icelander Bjork was the lead singer, whose biggest hit was the 1988 indie hit single “Birthday”
Got all of these – nice teamwork – but mostly Kim…
Round Five – Things associated with birthdays that fall next month
1. British singer with a “unique voice” (as described by the host) who recorded the 1970s single “You Make Me Feel Like Dancing.” And that was exactly how I felt for knowing this answer! Thanks mom for playing this record when I was a kid (LOL)!
2. Name of 1993 Counting Crows album, which had the hit song “Mr. Jones,” among other songs.
3. Biggest hit single for the Detroit-based band Sponge, released in 1995.
Got all of these, teamwork again (but this round was mostly Kim)
Round Six – Songs born in the 1970s
1. Last #1 Beatles album, released when Paul McCartney announced he was leaving the band
2. 1977 Thelma Houston disco single
3. Name of artist recording “Escape – The Pina Colada Song.”
Got all of these…I’m usually the “disco” person on these name that tune nights, but Kim took care of #2 this time!
We were in first going into the final with 65 points, out of six teams.
Final Category – I did not catch the final category…I think it was music or something (LOL)!
Players had to get two of these following questions correct.
1. Member of Bruce Springsteen’s E Street Band known by the nickname “Big Man”
2. One of the two top charting singles for the rock band Kiss
3. Name of first top 10 single for the rock band U2
We opted to answer #1 and #2 and got them correct! So exciting, usually these final categories kill us…And (storytime), the only reason I knew #2 is because my husband Mike dated a girl with a particular name back in high school and he used to sing that song to her. And that’s the only clue I’m giving to this answer! Besides this photo…

A love interest of one of the characters in the 1999 film Detroit Rock City. She shares her name with a hit single by Kiss.

And with this, here’s the only trivia-related “recap” I’m doing this week! Next one will be for Sunday’s tournament. I’m enjoying this little break! As always, Go Pods, and stay classy, Katy Perry!