I both love and hate boats. I love the IDEA of boats. Being out on the open water, feeling the breeze in my face, reining in my short hair with a bandanna (better to lose a bandanna than a hat). It’s kind of fun going to a place that’s only accessible by boat…or seaplane – or really intrepid swimming. Kind of exciting, right? My dad owned a speedboat for a few years in the mid 1990s, and it was a lot of fun taking that out on local lakes – big and small.

My “future” husband and I on my dad’s boat, circa 1996, this is probably Lake Erie Metropark.

I’ve also been on quite a few chartered boat rides in my life.  I’ve traveled to Mackinac Island, South Manitou Island, Grand Island and have done a few boat “cruises” that don’t actually go anywhere, they just take passengers around to see some scenic stuff. The Pictured Rocks boat cruise in Munising, MI is one of the most popular ways to take in a bunch of breathtaking Upper Peninsula scenery. 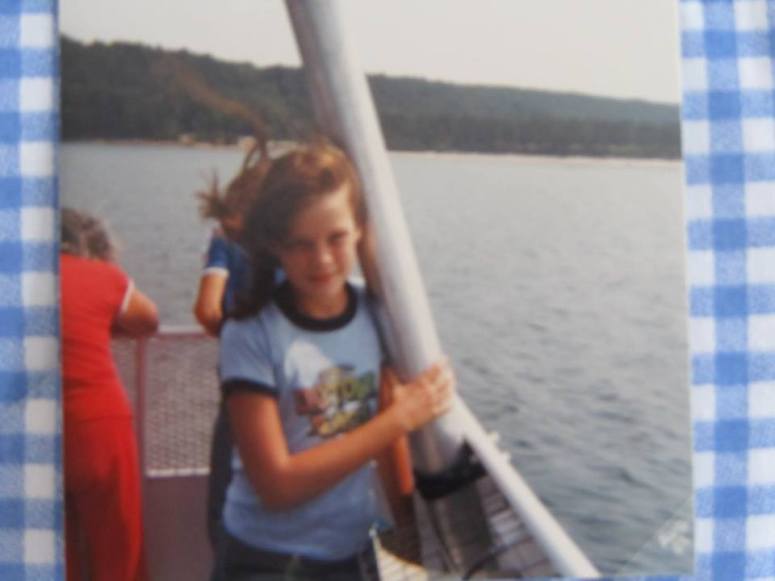 Me on the Pictured Rocks boat cruise in 1981 with my grandma and brother.

A few times as a kid, I went to Bob-Lo Island, which was an amusement park located in the Detroit River. It closed in 1993. It was located on “The Canada side” of the Detroit River, so when you went to Bob-Lo, you were going to another country! How exotic, right? I don’t think any of the old Bob-Lo boats are being used anymore, but Detroiters who still want a taste of this experience can take a ride on the “Detroit Princess,” which can also be rented for private events.

I heard that the Detroit Princess was the site of a floating trivia tournament years ago, maybe a year or so before me and my team started playing. Let’s see…a keg of beer was tapped dry, and heard some…other things about that trip, which aren’t appropriate for sharing in this blog! Let’s just say everyone had a good time on this day! Except the poor woman who had to be designated driver by virtue of being pregnant!

Me and my friend and Girl Scout troopmate Kathy on the Bob-Lo boat in 1981. Though I look deceivingly soulful, nauseous is probably a bit more like it!

In 1981, I took a “boating” class at Camp ‘O Fair Winds, which is about 25 miles northeast of Flint, MI. We had to strap on smelly lifejackets and get into rowboats, and we tooled around on McKeen Lake. And I hated every second of it. Rowboats just didn’t make any sense to me. If you were rowing, you couldn’t see where you were going. And I just couldn’t quite get the hang of it. The other girls called me a “slow learner.”  That’s a nice way of saying I was “boattarded.” The politically-correct equivalent of that word now is “boating challenged.” The more advanced swimmers got to use canoes, which I would learn, years later, make a “bit” more sense than rowboats. You got to see where you’re going, after all!

In 1989, I stepped into a canoe for the first time, with my friends Jenni and Wendy. We were on a trip with our high school band, and we would be paddling a section of the Au Sable River from Grayling to one of the nearby landing spots. Wendy was more experienced of a “boater” than I was, and proved to be a good guide when I had one of the paddles. For the most part, the trip went well – the scenery was beautiful, the weather was perfect, and I was singing silly songs. I remember singing Otis Redding’s “Sittin’ On the Dock of the Bay,” and I may have even sung a silly song that Bugs Bunny sang in an old Looney Tunes episode – “I”ll keep sailing til I…find you.”

Then when we hit the landing spot, there were boys flipping others’ boats over. And ours was one of them.

Though I didn’t particularly enjoy this experience, overall, I’d rate this trip as a four stars out of five…there was only a brief moment I wanted to hold Jason’s head under the water until he stopped squirming!

A few years later, I was dating a guy whom I would end up marrying, and we talked about doing a river trip. As it turns out, he and I are COMPLETELY INCOMPATIBLE when it comes to river adventures. Though we enjoy doing multiple activities together, we’ve come to realize that we’re both better off if we don’t go boating together (in boats we share or boats we have to “pilot” ourselves, that is). The only way it works is if we go out in separate boats and just kind of tool around on a lake – river trips together are a bad idea!

Here are a few anecdotes…

1996 – Au Sable River trip – we ran afoul of some brush, and our boat flipped over. Then the “blame game” began. Did he steer us wrong? Or did I not follow his directions? I don’t remember all of the details, but there was lots of swearing – and bitterness. It was a miracle we wound up getting married almost a year later! I’m happy the county deputies weren’t close enough to arrest us for cursing around women and children, lol!

2007 – Manistee River trip – This time, we used SEPARATE boats, borrowed kayaks, as it were. I wound up getting into trouble with some pesky branches/brush again, and my husband, wanting to be a hero, tried to bail me out. He wound up losing control of HIS boat while trying to rescue me. This was one of the last river trips we would do together….we bickered/fought a lot on this trip.

The Upper Manistee River north of Grayling, MI. This is not the stretch we paddled, which was north of here.

A few times since then – we took those borrowed kayaks out on northern MI lakes. Overall an enjoyable experience! I like being able to go my own pace, and not getting “pushed” down a river. When it comes to river adventures? I’d much rather sit on the landing spot and wait for the other boaters to show up!