Sometimes, when a player says during a trivia game, “It all comes down to the final question,” they’re just trying to console themselves for blowing 10 points on a question about literary characters – and maybe even eight points on a question about TV actors. And why not, for good measure, throw in a missed question about pitchers for six? But sometimes…sometimes..it REALLY does come down to the final question! Yeah, it certainly didn’t start off very good for our ragtag “foursome” Sunday at the Sporcle Live Pub Champions Trivia League Championship at 59West! It was very nice to be back at this very familiar banquet center after playing the tournament in East Lansing last season (which I will never speak of again, lol)! We soldiered through a rough game one (37 points), but made a nice game two comeback (50 points). There was never a more nail-biting night of trivia after we handed in our final question answers! Thankfully we knew we’d gotten the question correct…but…would we manage to land in the “prize zone?” And once the scores were read, it was kind of hard to curb our enthusiasm! Fourth place/$150? We’ll take that! Special thanks to Evan for helping us out in our third trivia tournament, and also longtime trivia helper Archie for helping us in our hour of need! Without further ado, here…are…the questions!
Game One
1. Capitals – Of the U.S. capital cities that have names beginning with the letter “A” which two are closest to each other by straight line distance? 4
2. Formulas – What organic compound’s formula is C4H10 and is a gas at room temperature? Neither of our team’s scientists were present for this game, so we missed this for 1.
3. Games – Tangs, biscuits and take 10 off zone are among the elements of what game? Reasoned correct guess for 3.
4. Movie Roles – Two Oscar-winning actresses, one who played Lisa Rowe, and the other who won for playing a character named Gerda Wegener, also each played what character on film? Nope for 2.
5. Stocks – As of April, 2017, among the five largest stock exchanges based on market capitalization, the youngest is based in what country, having been founded in 1990? Miss for 5.
6. ’90s Music – Released in 1998, the first album in the “Now That’s What I Call Music” series included three songs that reached number one on the Billboard Hot 100 charts – one by Janet Jackson, one by Hanson and one by Ci and JoJo respectively. Name two of those songs. Got this for 7.

7. Pitchers – Since 2000, four different pitchers have had at least 300 strikeouts during a single MLB season. Name two of those four pitchers – two of whom are active players. Miss for 6.
8. Literary Characters – Set in 16th Century London, Tom Canty and Edward are the title characters in what work by Mark Twain? When the answer was revealed, we were like, “We didn’t know HE wrote that…,” though we did think of that story. BIG miss for 10. Commence “Oh shit we’ve blown this game,” and me saying “It all comes down to the final question…”
9. TV Families – Sean and Claudia Finnerty and their kids Lilly Jimmy and Henry are an Irish Catholic family living in Staten Island on what sitcom that aired from 2001 to 2005, first on Fox and later on the WB? Evan demanded the big point slip here, got this for 9.
10. U.S. History – The XYZ Affair, which led to the undeclared quasi war in the late 18th Century, was a political and diplomatic dispute between the U.S. and what other country? A bit of discussion, but got for 8.
Mystery – Initials
Make a celebrity name based on the initials and the following clues.
1. Voice actor playing Moe Szyslak on “The Simpsons,” first jeans manufacturer in the United States and third place winner of the fifth season of “American Idol”
2. Director of “Sleepless in Seattle” and “You’ve Got Mail” and collaborator with John Lennon on “Double Fantasy”
3. Actress from “Working Girl” and “Body Double” and former boxer who voices himself on an “Adult Swim” animated series 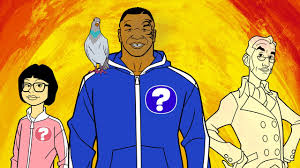 4. Current Speaker of the House, fourth creator of calculus and actress playing Lani McKay on “Baywatch”
Missed #2.
Unsure what place we were in going into the second game, but we had 37 points. Only the top three scores were read, Crumbums, 52; BAMF, 56 and What the Shibboleth, 57.
On to Game Two!
1. World Leaders – The fourth president of Egypt was Hosni Mubarak, who served for almost 30 years. Who was the third president of Egypt? For the first time in the entire game, every single one of us came up the right answer here, got this for 10.
2. Chart Rarities – In 2017, what rapper became only the sixth artist to have two different albums reach number 1 on the Billboard Hot 100 charts in consecutive weeks, in effect replacing himself at #1. One album is self titled, the other is HNDRXX. Miss for 2 (though Evan really, really tried on this one)!
3. Space Programs – Two of the six space shuttles were named for ships used by Captain James Cook during 18th Century expeditions. Name one of those two space shuttles. Mike for the big points, 9.
4. Culinary Terms – What five-letter word means “jumped” or “bounced” in French? 5
5. In The News – At the Academy Awards in March, 2018, Frances McDormand closed her acceptance speech by saying what two-word phrase for a provision added to a contract of a performer to assure certain levels of diversity? Miss for 1. Guess none of us watched the Oscars ceremony!
6. Math – What is the term often used in math for a statement that is assumed to be true without proof? Mike and Evan teamed up with success here for 7 (so, so glad they didn’t need ME for this one).
7. TV Actors – What actor won three consecutive Emmy Awards in the 1980s and also won again in 2000? Miss for 8.
8. 2018 Films – Three films opened in February, 2018 that have grossed more than $100 million at the U.S. box office, including Black Panther. Name one of the two other films. I’m going to be honest here…I didn’t do a whole lot of “studying” for this tournament…but I will say I’m pretty glad I happened to review THIS little tidbit before the tournament! Got this for 6.
9. Languages – Three of the 10 most populous nations in the world have English as an official language. The U.S. is not one of those countries. Name two of those three other countries. 4
10. Old Olympic Sports – What sport that has its origins in tribal games played largely by Native Americans in what is now the Northeastern United States and Canada was contested at the Summer Olympic Games in 1904 and 1908? And just when Archie was starting to feel like he didn’t have any questions of his “own” to answer? Bam for 3!
Mystery – Presidents and Sports
Identify the president born nearest to the following sports venues.
1. Mercedes Benz Superdome
2. Madison Square Garden
3. Dodgers Stadium
4. Pepsi Center/Sports Authority at Mile High Stadium
Missed #2, we thought this was a bit too close to the state in which the 22nd and 24th president was born…
Scores: Forty-two teams, scores 39 to 112, with What the Shibboleth in first, tied with BAMF. The remaining top 10 scores were: Shooting for Penultimate, 85; ‘Pods, 87; Sabertooth Crotch Crickets, 90; Squints, 92; Homoerotic Trivia Montage, 93; Crumbums, 96; Prune Tracy, 101; Teamy McTeamface, 103.
Final Category – Movie Titles
Since 1995, four pairs of films that have won the Academy Award for best picture have full titles ending in the same two letters. Spotlight and Moonlight are two of those films. Name two other pairs of those four pairs.
My “source” in the field tells me that the Central Division finals had this question instead:
Of all of the Oscar winners for best picture in the past 25 years, there are four movies whose last letter in their full title is not the last letter in any of the remaining movies. One is “No Country for Old Men.” Name the three others.
Got it…hey…I might not be the best “movies” trivia person. There are FAR better “movies” experts on trivia teams than me! I’m pretty much a rank amateur compared to some of the real movie nerds out there. I have my “pet” categories, for sure, and possess decent general movie knowledge – and know more more random trivial bits about movies that are not likely to ever get asked about in trivia games. It just turned out that names of best picture winners is…one of my “pet” categories! How thrilling to get this question in a tournament! I don’t think I’ll be THIS lucky again anytime soon! Thank…the…Trivia Gods!
Top Five finishers:
5. Chinstraps, 100 (moved up from 13th)
4. Miskatonic University Fighting Cephalopods, 117 (moved up from ninth)
3. Sabertooth Crotch Crickets, 120 (moved up from eighth)
2. Homoerotic Trivia Montage, 123 (moved up from sixth)
1. What The Shibboleth, 142 (held onto their lead)
Well, that’s the last chapter of the winter/spring Sporcle Live season! Both of the trivia leagues we play are in their “off season” this week, so we’ll be on a lighter trivia schedule. I will be playing in a ’90s music trivia game with Kimberly (and company) Wednesday, so look for that recap on Thursday. As always, Go Pods, and stay classy, Alex P. Keaton!