If you ever watched “Star Trek: The Next Generation,” you’re likely to be familiar with the character Deanna Troi, who was the ship’s counselor, and was an “empath.” Which means she was really good at sensing the emotions of others. Though I didn’t realize it at the time the series first aired, I’ve come to realize that I have things in common with her – whether I want to – or not. 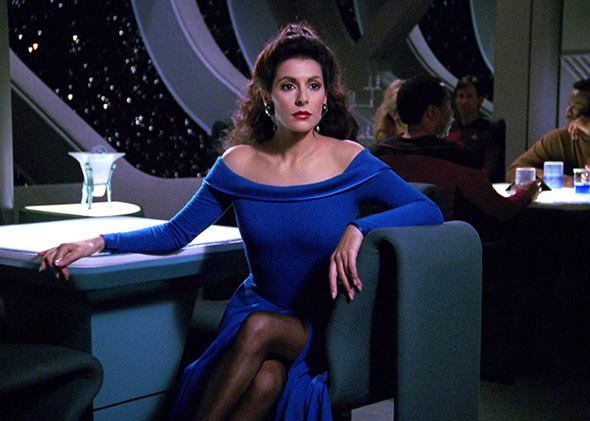 Deanna Troi from “Star Trek: The Next Generation,” whom was played by Marina Sirtis

Ever since my friend Michelle did a “things you didn’t know about me” post on Facebook about a week ago, I’ve been doing some…soul searching. Thinking about the things I would include in a “weird things about me” post. Some of which I’ve already posted here and also here.

Now to talk a bit about THE one thing about me that I sometimes wish I could change…but can’t. And that is  my overactive “empathy chip.” I’ve always had a keen sense of other people’s emotions ever since I was young. Whether a person’s happy, sad or mad, I always seem to keenly sense it – and feel it. I have a “fight or flight” response, especially if someone is upset or angry. I either want to flee from the situation, or find a way to make the person less upset (which doesn’t work if I wind up getting upset, too).  To learn a bit more about empaths, read this.

Let’s rewind to me being 4-year-old in 1976, and I asked my mom why my grandpa seemed to be “mad.” My mom explained to me that Grandpa wasn’t mad – he was just “very, very sick.” He was dying of cancer at the time, but I didn’t know that until later. When things got really bad, he was hospitalized, and I could see that my family members were really, really upset. I wanted to go into Grandpa’s room to see him, but kids weren’t permitted in patients’ rooms at the time. When he died, I remembered lots of people were crying at his funeral. My memories of that day are very, very faint, though I do remember bright sunshine coming in through the windows of the funeral home and seeing people cry. This was the first time in my life I learned about death, but I can’t say I fully understood it at the time. All I knew is my grandpa wasn’t ever coming back. I would have a dream about him and my grandma a couple of decades later in which I said to them, “I’m all grown up now,” and they both just walked away holding hands and smiling. Were they communicating with me from beyond their graves? Perhaps! All I know is that dream just felt…good. 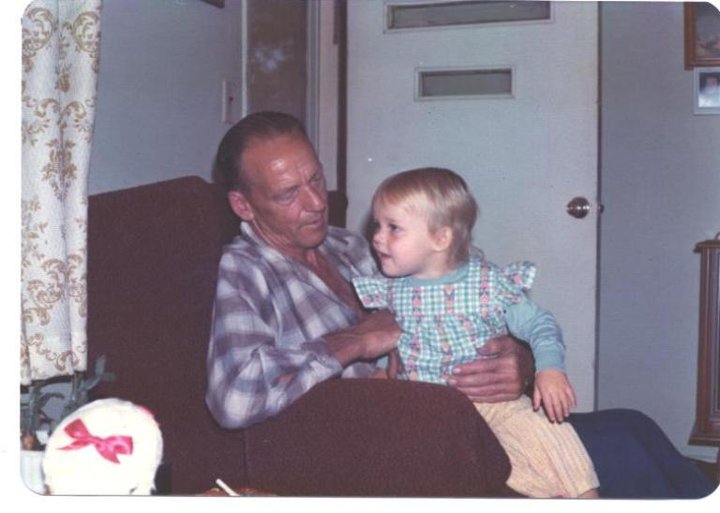 Me in 1974 with Grandpa P. I’m wearing one of my mom’s homemade outfits, the pants were probably hand-me-downs from my brother! I was the youngest of his grandchildren, and from what I’ve heard…I was his favorite!

A few years after my grandpa died, my dad was going through his own emotional hell, which trickled down to the rest of the family. He had been promoted to a supervisory position at Buick City, and he even got shirts with his name monogrammed on them! Though the job paid better than his “line” job, the stress of having to be in charge of others took a huge toll on him. He was short with the family, and was frequently in a bad mood. When he stepped down from that job, everything improved almost instantly. He started going back to his old self. Eventually he would take a more “white collar” job and work in Buick’s training center, where he helped write training manuals, among other things. My dad’s never been a super upbeat chipper kind of guy, mind you, but NOBODY wanted to see “grumpy dad!”

Not to sound crass or anything, but just because I’m empathic, it doesn’t mean I care about all of the people whose feelings I sense. I just feel them – and I feel their pain, their joy, and their sadness (I guess you could say I’m an emotional conduit whether I like it – or not). Honestly…I really wish I could just shut it off! It’s hard enough dealing with my own emotions, let alone dealing with other people’s! Sometimes I can’t even be in the break room with my co-workers, especially if any of them are complaining about customers, venting about their lives, etc. It gets too overwhelming. Sometimes I just need quiet! Constant chatter can really rattle my brain. I have a boss who chatters almost constantly and makes me wish she were a DVD and I could just turn off the commentary, lol. Another co-worker is in a relationship with a guy whom we all know is a giant dick who mistreats her (emotionally, not physically – though both are bad). It sometimes pains me too much to hear her talk about him and his epic assholery. I secretly wish he would just dump her…though the emotional pain for her would be unspeakable for a while, she would eventually move on and be better for the experience.

It’s not that I mind being a “listening ear” when the situation warrants. Just last night, I met with a friend for a “name that tune” trivia game, and I listened a bit while she vented about the stresses of dealing with high school students in her job as a math teacher (there is absolutely no way in hell I could do her job without killing myself). One of her students wrote the word “Kill the Community” on the top of his homework assignment, which she later learned was a name for a line of fashions he and his friend wanted to create. But in adherence to school policy, she had to report the student because of this. His dad was FURIOUS! She also talked a bit about overly coddled students complaining of “anxiety” and being unable to complete assignments within specified times, etc.

My “empathy” is not just limited to human emotions –  I once administered grief counseling to a cat! No joke… When my parents were on vacation in 1999, they had one of their cats euthanized shortly before the trip. I administered the grief counseling to one of the surviving cats, because I could tell she was saddened by the other cat’s absence and death. I held her on my lap, petted her, and talked to her in a soft voice, assuring her that the dead cat was in a better place. Sure, I felt a little whacko doing all of this, but I  felt like it was the right thing to do. And more importantly, I think it actually worked! I felt like she understood what I was saying to her. My parents usually spot me a little cash when they go out of town and I take care of their pets, but in this case, I feel like they really got their money’s worth out of the deal! I’ve mused about the idea of whoring myself out as a “cat psychologist” to rich pet owners and fashioning myself as the cat version of Cesar Millan…the “Cat Whisperer.” 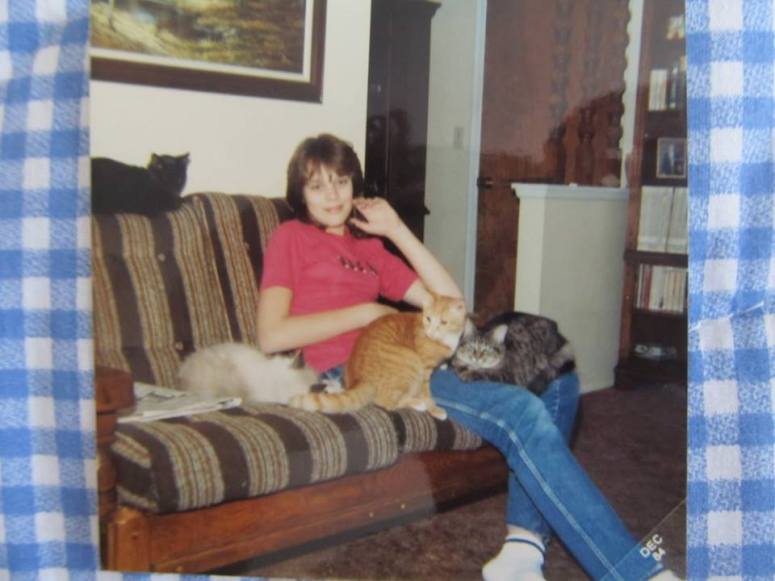 Me with a pile ‘o cats in late 1984. I even have cats on my shirt. I’ve always been kind of a “cat magnet.” Ironically, I am very allergic to cats, and have to take allergy pills when I visit people’s houses if they have more than one cat and am going to be there more than a couple of hours. Going away to college in 1993 and living cat-free made it nearly impossible to come back home to visit without my allergies/asthma going haywire. My husband is also allergic, so we don’t have any pets. Though I still have “sneezy allergies,” the asthma is…gone.

Humans are not always as easy to deal with as cats. At last Saturday’s trivia game, the trivia host was giving off lots of different emotional vibes – all negative – mainly anger.  Even just talking to her briefly before the game I got a huge dose of it. Through brief conversations with her, I know about some of the stressful things she’s going through in her life (getting her pay cut on her primary job, stepping down as manager of a bar because of the stress). Last Saturday, I asked her whether trivia would be scheduled on St. Patrick’s Day, and she actually seemed insulted that I’d asked! It only got worse as the game progressed, when she started angrily spouting off on the mic about a question many teams had missed because they had disregarded her instructions to “be specific.” It got to the point where I couldn’t even be the same room with her anymore (we wound up leaving after the first game). I’m not planning to play any more games that she hosts until April 7, and that’s only if my team needs to play the game to qualify for the tournament! Yup, her emotions have officially scared me off from playing here for a while. I’m sure we’ll be back at some point, because we have a player who lives nearby, and he’s fun to play with (he’s also a really good player and helps us win money, lol). Maybe we’ll just go to the games that he can attend.

For good or for bad, I’ve learned to deal with this. My emotional sensitivity has helped me know when people are angry or are in bad moods and either avoid them – or try to help them. I used to be able to tell my husband’s mood by the way he closed the door to our apartment (he was commuting from Ypsilanti to Southfield and later, to Troy at the time). If you’re not familiar with the megalopolis of metro Detroit, MI; this commute involved trekking the most used/congested highways (most riddled with potholes) in the entire state during rush hour. If he slammed the door, I knew to give him some space. If he closed the door normally, I could talk to him! Thankfully, he works from home now, so I don’t need the “door test” to know his moods!