An unusual trio met at Salt Springs Brewery Thursday for a Sporcle Live game hosted by Sporcle Trivia Nights With Josh M. Myself, Mike and my co-worker Deb S. who retired today after 17 years. She had never been to a pub trivia game before, but had previously visited this brewpub. I had requested a couple of early 1970s songs beforehand, one of which I knew was a good choice when I noticed she was kind of moving her head to the grooves of Earth, Wind and Fire’s “September.” Mission accomplished! We also had the highest score of the night at the bar with 155 points, got both final questions correct.
Our bar tab that night was a bit light, Mike and I opted not to have any beer (we were both a bit hung over from our trivia night on Wednesday, ahem, especially me…). Mike and I have both tried the beers here on previous visits, however! I had a seasonal brew around the holidays that tasted exactly like a ginger Christmas cookie (OMG it was SO good…)! Deb sipped on a Mill Pond pale ale, and Mike and I wound up getting a beer cheese bread appetizer, which was pretty tasty! Good news is our entire tab was covered by our $25 first place gift card win in game one! And Salt Springs allows tips to be put on the gift card, too (that’s kind of unusual from my experiences).
It was a pretty full house in Salt Springs, we arrived a little after 7 for a 7:30 game, and were put on a wait list, but provided a cell number so they could text us when the table was ready. The adjacent beer garden is quite nice, lots of tables, and even some propane heaters to take the chill off. There was also a big gas fireplace where a bunch of people were congregating. I got my text just before game time started, so all good! Also good that questions were projected on a screen we could see, the questions were a bit difficult to make out at times in the restaurant, which was formerly a church – so lots of echoing! An unhappy toddler was sitting two tables down from us, and her cries could be heard throughout the entire joint (poor kid, she was WAY too young to have any beer). So sad to see someone tired and cranky and definitely not having a good time in a bar, right? Enough with what is quickly turning into a Yelp review, how about those questions?
Game One
1. Number One Songs – What number one song about an alcoholic drink was written by Neil Diamond and also hit number one for the group UB-40? One of my “sources” in the field told me that during the game going on the same time as ours at Original Gravity the host pronounced the name of this group as “UB Four O” (thanks for the report, Doug). So sad! 10 points.
2. Book to Movie – What author wrote the 2002 romance novel “Nights in Rodanthe” which was later adapted into a film of the same name? Yay, this is a topic I attempted to study before a tournament. And I jokingly said this should be called “Nights with Rodan.” Imagine a romance movie with Rodan! Go on! You KNOW you want to! Got this for 9. 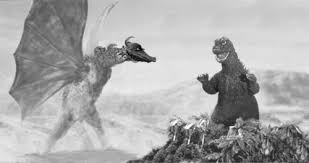 3. Food Companies – What conglomerate owns Yoplait, Totino’s, Nature Valley and Betty Crocker? Considered right company, missed this for 3.
4. TV Guest Roles – What actress won an Emmy for her guest role on “Friends” as Rachel’s sister? A couple sitting next to us who weren’t playing kind of helped broadcast this answer so we went with it (hey, we didn’t solicit her help), got it for 2.
5. Rocks – Basalt is what type of rock? Miss for 4.
6. NFL Games – Since its inception of a third Thanksgiving day game in 2006 what two East coast NFL teams have hosted the third game? Name one for the points, two for an extra “nerd” point. Managed to get one, but for only 1.
7. Light – What does the letter “c” stand for when referring to a CFL bulb? 8
8. Taglines – What 1985 film starring Paul Reubens used the tagline, “The story of a rebel and his bike?” This was also the feature film debut for Tim Burton, got this for 7.
9. Non Fiction – What type of vehicle fills in the blank in a book by American writer and philosopher Robert Pirsig – “Zen and the art of (blank) Maintenance?” Mike with right guess for 6.
10. State Nicknames – “The Natural State” is the nickname used by which state that lies along the Mississippi River? Deduced the right river for 5.
Mystery – Name that Jesse – Give the last names of the following people named Jesse based on the descriptions
1. He played the founder of Facebook on film
2. 19th Century American referenced in the title of a top 10 song by Cher
3. An athlete who was a four-time Olympic gold medalist in the 1936 Berlin games
4. Walter White’s cooking partner
Missed #4. Dang it, if I’m going to bother trying to learn titles of Nicholas f—ing Sparks books, I might as WELL see what I can try to shove into my brain from “Breaking Bad,” right? Nope…the line is drawn here, lol!
Scores: Twelve teams, scores 16 to 58, with a team whose name I did not even remotely write legibly in first with 58. We were in second with 57, playing under the name Get Your Penney’s Worth.
Final Category – Legal Terms
What two-word phrase, made most famous by the game Monopoly, are the fourth and fifth words in Section 501(c)(3) of the Internal Revenue Code (the federal tax code)?
Mike and I teamed up here. A light bulb went off in my head when I remembered what 501c3 is commonly associated with. And Mike took it away from there.
We wound up in first, got a $25 gift card. Unsure who the other top finishers were.
Game Two
1. Hardware – What hardware retailer claims in its advertising to the place with the “helpful hardware folks?” Love, love, those old jingles that have taken up residence in my brain…10. And also hate those jingles!
2. 2000s Rap Hits – What rapper’s debut single “Right Thurr” peaked at number 2 on the Billboard Hot 100 charts and stayed there for five non consecutive weeks, giving him the first of three top five hits? We were so clueless we couldn’t even think of the right guy’s name for a WRONG answer! Automatically thought of the “Chappelle’s Show” spoof where he sings “I’m gonna pee on you.” Never even heard of the right guy, miss for 1.
3. DNA – Abbreviated HGP, what was the name of the international scientific research venture with the goal of determining the sequence of nucleotides of base pairs that make up a person’s DNA? FB clue…so glad this was projected on screen so I could actually write it down word for word!
4. George Lucas – The success of what 1973 film directed by George Lucas renewed ABC’s interest in the unaired pilot “Happy Days?” Deb said she remembered seeing this in theaters…I told her the first movie I saw when I was a baby in 1973 was the animated “Robin Hood” – at a drive in! And this fact actually helped me in a previous trivia game, lol…Got this for 8.
5. Rivers – The Yellow River is the third longest river in Asia and the sixth longest system in the world and is located in what country? 7.
6. Mascots – Which West coast MLB team has an unofficial mascot known as Rally Monkey? Needed Brad for this one. Funny thing during the game…when I knew answers, I said “That’s easy.” Which I NEVER say when I know answers! That’s what Brad always says when HE knows answers! Was I attempting the play the role of Brad in Thursday’s game? Weird…missed this for 2.
7. Sitcoms – Audio clue of sitcom that aired from 1998 to 2006. Deb was all over this one (I told her that her “big break” would be in game two!), 5.
8. Famous Phrases – What four-word phrase appeared on a sign in former president Harry S. Truman’s office? 6.
9. Literary Characters – Athos, Porthos and Aramis are collectively known as what title characters? 4.
10. Schools – Wharton Business School is the prestigious business school of what Ivy League university? Nope, miss for 3. 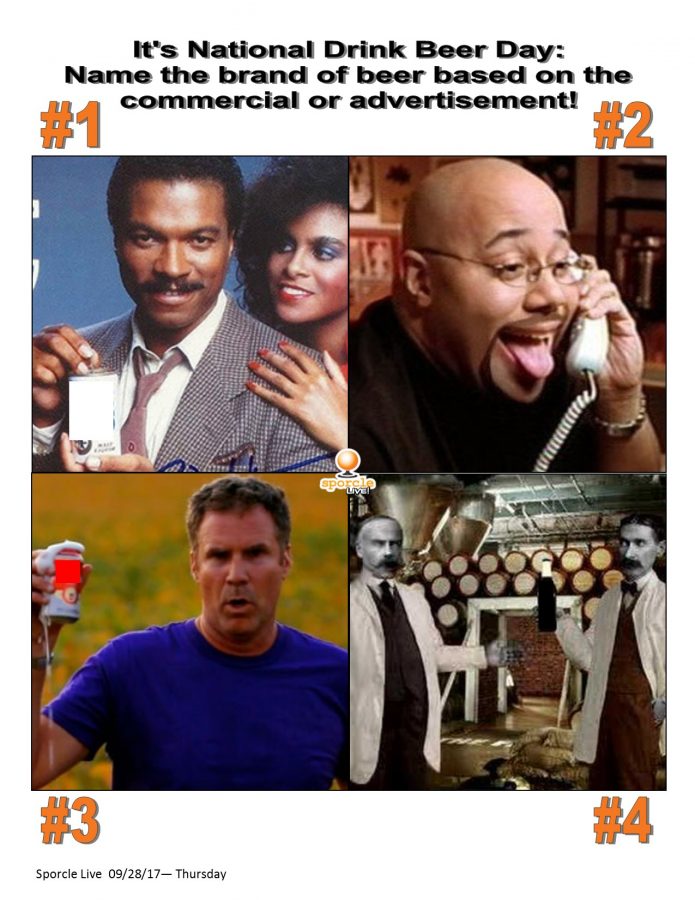 Mystery – https://www.sporcle.com/blog/visual/beer928/ Missed #4. When Josh read the answers, he channeled an inner drunken frat boy from the depths when reading #2!
Scores- Nine teams, scores 30 to 62, with Two Men, One Beer Cup in first. We were tied for fourth with We Drink and We Know Things with 58.
Final Category – Songs from Movies
In the 2006 animated film Ice Age: The Meltdown, a group of vultures sing a version of what song that originally appeared in the musical Oliver!?
Yup…knew this, thanks partially to this song also being used to advertise a certain kind of food in the 1980s…(I’m telling you my brain is a steel trap for old commercial jingles…it’s kind of sad, really!). Anyone else remember the Murphy’s Oil Soap jingle? Tato Skins? Coronet paper products? Bacos?
This put us in a tie for third with We Drink and We Know Things. I haven’t done a tiebreaker in months, so I was excited! Let’s do this! Had to give the population of Columbus as of the 2010 Census (city proper and metropolitan area). WDAWKT put down 270,000, we guessed 970,000, our guess was closest so we won a voucher for a free pint ‘o beer. That’s like a $5 prize. Not bad! Deb can use it next time she visits this place. Well, that’s it for this game, we’ll be back at it Saturday at Oscar’s in Saline, possibly with a third player in tow! As always, Go Pods, and stay classy, Francis from “Pee Wee’s Big Adventure.”