My husband just told me that he had a dream where we had to answer this question:

How many square miles is the Bermuda Triangle?

In the dream, his answer was “one million and change.” Also in the dream, we won whatever trivia contest this was (he is a little fuzzy on the details…it WAS a dream, after all)!

Turns out the REAL answer is “between 500,000 and 1.5 million.” So a question with a widely variable answer such as this – isn’t likely to be asked in too many trivia games!

Does anyone know which character in a 1991 movie said:

“Nobody gets out of the Bermuda Triangle. Not even for a vacation.” 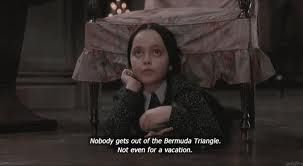