Today is the first day of the new Sporcle Live pub trivia season for 2020. And though I haven’t made any specific “plans” for my team to qualify for Sporcle Live semifinals/finals this season? Well…why not play tonight anyway? It’s close to home, weather isn’t supposed to be terrible, we haven’t played for a while, Labatt is the “beer of the month” at Sticks and…it gives me an excuse to write my first trivia recap since (checks my blog posts) December 24! Whuuuut? This means that it’s been two whole weeks since I posted any “new” game recaps! I’m probably in just as much trivia withdrawal as some of you blog readers are! Wow, someone give me a medal right now! Or one of those “chips” that those AA people reward themselves with? Give me SOMETHING to reward me for my restraint! How about a cookie? JK, JK! I’m just being silly…(but I wouldn’t turn down a cookie)!

Yes, I know I posted that “old” trivia recap from The Wurst Bar from July, 2016 – which got 11 views. I really should go through my Facebook posts and see what other trivia recaps I might’ve missed when I started “archiving” them on this blog site in late 2016. But it’s very tedious – and time consuming – and I have so much housework to catch up on! Our latest house cleaning “dragon” to slay is getting our guest room/office/attached bathroom in shape. Why? Because it needs to be done – and we might also have a house guest soon! I’ll admit I’m a little afraid of what those dust bunnies under the futon might be like! With “smooth” floors (laminate, hardwood, vinyl) dust bunnies can hang out and multiply – and not end up ground into submission like they do with carpeting. Trust me on this one, folks!

But that room and bathroom isn’t getting cleaned today! It’s the last day of my vacation, after all! But the allure of trivia just cannot be ignored. There are itches that must be scratched. And after two weeks of not going to ANY live pub trivia games – I’m having some serious withdrawal!

Last Friday night, I was in a bar while there was trivia being broadcast on the screen and my husband and I got all excited! Then we learned it was app-based – and you needed to play along on your phones. Now if this were a bar we frequented, we’d think about doing that, then maybe we’d do that. BTW, for inquiring minds, it’s called “Tap TV.” I’m sure some of you trivia folks have heard of it already! My mobile device is pretty much WiFi only, and the bar we were in didn’t have an open WiFi network so…that was out.

Speaking of trivia apps, whatever happened to Trivia HQ? Is that still a thing? I remember when it was the “new hotness,” and my trivia “peeps” would NOT shut up about it! There were numerous Facebook posts (lots of brags about having one two cent prizes, etc.), some players chatted with me in Messenger about it trying to get me to play, others would drop what they were doing at a given time to “tune in” to the HQ games. Yeah, I never got into that one (I’ve gotta draw the line somewhere with my trivia “habit,” after all)! 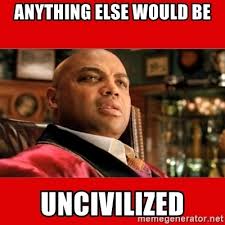 Just because we’re playing tonight it doesn’t mean we’ll be playing every Monday. But why make any of the other teams think that the ‘Pods aren’t going to be in contention on Monday nights? To do anything less…would be uncivilized! Google tells me that was the catchphrase used in old Right Guard commercials.

Let’s see how we do tonight! Might just be “the two of us.” See you in the next recap – or in the next blog…