Editor’s note: Recap of April, 2016 game at the Rusty Nail Lounge in Canton as reported by the team More Beer Less Pants. I have officially called a “moratorium” on playing ANY MTL games (excluding tournament games) at any MTL spots in Canton. I have my reasons…My attempts to answer these questions will be in this color.

A duo from MBLP ventured out to the Rusty Nail Lounge in Canton last night, to try out the My Trivia Live competition while we’re on hiatus from The Bowery Grille & Pub. Since this game did not really count in the overall scheme of things for us, Ging and I were playing only for fun. Which was good, as a few of the questions were out of our wheelhouse.

Since the Wings/Lightning playoff game was on, and half the bar was there to watch it, we had to play a modified version of a standard game. Instead of one question, followed by a song, then an answer, we were given all three questions for each round during the commercial breaks, then would turn in our answers while the game was on TV and get the answers (and next round questions) at the next commercial break. It sounds like a horrible mess waiting to happen, but it worked surprisingly well. It allowed for more game watching and friendly banter than a normal game. I’m sure it probably could have devolved into some shenanigans with some of “those” teams in the far corners, but we didn’t care since this is not our usual venue.

A special thanks to the MTL chief who was in attendance with some of the hosts and admins, who bought a round for us and at least one other team sitting at the bar. Now that’s customer appreciation right there! (it’s not the first time she’s done that for us, either.)

On to the game:

E
2) What is the average of the following numbers: 1,3,5,6,7,9,25?
3) What leisure sport has players hitting wooden balls with a mallet, through wickets on a grass playing surface?
– MTL typically starts off their games with some cupcake questions in the first round. This was no exception. 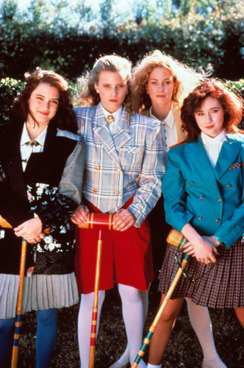 4) In Shakespeare’s MacBeth, what line comes before “fire burn and cauldron bubble”?

Double, double, toil and trouble?
5) Formed in 1961, what organization uses the slogan “The toughest job you’ll ever love”?

Peace Corps.
6) Known for more than acting, who was married to Jane Wyman from 1940-49? Ronald Reagan
Bonus – Tom Hanks co-starred with his future wife, Rita Wilson, in what 1985 film? Ugh…it’s either Volunteers or The Man With One red Shoe. I’m going to say Volunteers. Tough because both of these movies came out the same year. Would not have been certain enough to “risk” the three points…
– Got the main questions, but not the bonus. Knew the movie, but not the title.

7) What singer/songwriter has gone by the pseudonyms Jamie Starr, Alexander Nevermind and TAFKAP? Prince.
8) The slang term “cooties” refers to what real insect? Lice? No idea.
9) In Greek mythology, what is the name of the sailors that accompanied Jason on the journey to find the Golden Fleece? Argonauts
– Totally missed on the singer/songwriter. May have been easier if we saw TAFKAP written out, instead of just spelled over the mic. Nah, we probably would have still missed it.

Halftime – Buildings
Sweet! We have an architect playing. These should be easy!
Name the US cities in which you would find the following towers:
a) Willis Tower Chicago
b) Trump World Tower New York City?
c) Hancock Place Boston? My first guess was Chicago, but that seemed too obvious.
d) Coit Tower Never heard of it…

Missed C&D. Ouch!
After the first half, we were sitting in 3rd, down by 5 points.

10) Newsletter Question – In1878, which university was the first to make all degrees open to women: Univ. of Edinburgh, Cambridge, Oxford or Univ. of London?

11) What is the last name of the Italian immigrant that invented a whirlpool bath for his 15 month old son with rheumatoid arthritis? Jacuzzi?

12) What is the only US city to host the Winter Olympics twice? Lake Placid?

13) At his death in 2011, who was the largest individual stockholder of the Walt Disney Corporation?
– Missed the category of “Billionaires” which would have eliminated our answer right away.

14) What book, originally published in 1984, consistently tops The New York Times Best Seller list in the paperback advice category, and was named one of USA Today’s “25 Most Influential Books” of the past 25 years?
– Nope.

How to make friends and influence people? My dad had that book (I think his mom bought it for him). No clue.

16) Who is the only Disney animated feature film title character that does not speak in their film?
– Oops. Picked the character from the film I haven’t seen, and not the correct one from the film that I saw within the last 3 years.

17) What is the 3rd largest city, along with Dallas & Ft. Worth, that makes up the Texas Metroplex? Houston? Not very good at Texas stuff, I just always try to remember “everything’s bigger in Texas” on trivia nights!

18) What is the anatomical name for the shoulder blade?

Going into the final, we moved up to 2nd place, but remained 5 points behind the leader.

What is the only US prime time TV show to have three different actresses win Best Actress in a Comedy Series in three consecutive seasons?

I’m guessing the  Carol Burnett Show. Not my kind of category…wait a minute. I’m going to guess Alice…, uh, definitely no… Designing Women? Mary Tyler Moore show? Dammit…now I want to know the answer…(which I attempted to look up after making my incorrect guesses). AHHH I SEE THE CORRECT ANSWER NOW! Now to remember this factoid (LOL)! Thank you for being my (I’m going to just leave this here).

Needed a full team on this one. While I’m usually good at TV questions, I’m not the best at remembering award winners. We went with a show that coincidentally had one of the winning actresses, but not the right show. Oh well, this was just for fun anyway. Next week, we’ll be at The Bowery to get our Sporcle and Shine with Emily.

Until next time. FEAR THE BEER!