Decided to hit up the last “regulation” game of the Sporcle Live season Saturday and play at Oscar’s Sports & Grill. My living room was being used for purposes of binge watching something I had zero interest in watching, so….off to trivia I went! The only real benefit coming out of the game (other than getting out of the house for a bit) was breaking a tie in league points with Better Late Than Never (who did not show up), which allowed us to move into third in the overall standings. This means we are in third place at two different venues going into next week’s venue tournaments, one of which we hope to win!

Smirnoff Ice was the “beer of the month” at this bar, so I got two of these for $3 each. A bit too sweet, but not undrinkable! Yes I really do use that many pens by myself during one trivia game…

Other than that, it really couldn’t have been more of a “duh” set of questions for me playing by my little ‘ol self! Oh, all right…I know I’m not that “little!” But seriously, THESE categories were among the ones killing me – NFL players, boy bands and puppets (from a show I’d never heard of). Even seemingly friendly sounding categories wound up spelling doom on this trivia night! And who knew that THIS president was ever on a coin? Apparently not me – nor anyone else in the bar! Bet that thing is worth a buttload of money now! If you have one of these, best keep silent lest your shady neighbors find out and break into your house to try stealing it! To see more about those questions and others vexing me on this cool trivia night, read on!
Game One
1. Cars – What car, first produced in 1908, was nicknamed “Leaping Lena” and “Tin Lizzy?” 10
2. Recent TV – Dylan Minnette and Katherine Laingford star in what series, which has been criticized for glamorizing teen suicide? I put in a guess of “Heathers: The Series.” Well, it’s already been made into a musical, could a TV series be far off? Miss for 1.

3. Contests – Name one of the three men who have won Nathan’s hot dog eating contest in the 21st century. Name two for an extra nerd bonus point. Miss for 1. Apparently I need to study up on notable competitive gluttons! Now pardon me while I go look up who ate the most Twinkies in one sitting…and who consumed the largest number of cans of aerosol cheese in one sitting (cans and all, lol)…and who consumed the most cans of Planter’s Cheese Balls …who stuffed the most standard sized marshmallows into their mouth at once…! I remember a couple of players at an OG trivia game last fall joking that hot-dog eating contests should be used to settle disputes between men (interpret that however you wish)!  I won a hands-free doughnut eating contest at Girl Scout camp! We also had a contest to see whom could guzzle pop from a baby bottle the fastest at a friend’s birthday party in junior high and I won that contest (not sure that’s something I should brag about, ahem)! After creating all of these images of rampant gluttony I may have to barf now!

🤢
4. World Cities – What country’s most populous city is Karachi, and its capital Islamabad? 9
5. Video Games – “It’s dangerous to go alone – take this” is a phrase commonly associated with what NES video game debuting in 1987? Got this on a guess, but for only 3.
6. Planets – Which of the eight planets has the shortest day at just under 10 hours? Miss for 8. I figured this would be the smallest planet. I was wrong…proof whenever I play without Mike I wind up needing him!
7. Shakespeare – “The raven himself is hoarse,” “Tomorrow, tomorrow” and “Is that a dagger I see before me” are all quotes from what Shakespeare play? In addition to competitive gluttony, this is another topic I need to hit up! Miss for 4.
8. American Art – “The Word of Life” is a 134-foot tall mural located in Northern Indiana known by what common two-word nickname? John, a question about art in your ‘hood!

Got this for 7 (I have even seen this in person before).
9. Cover Songs – Audio clue of a bluegrass version of a 1980 song with the lyrics “She keeps her motor clean” among others, got for 6.
10. Acting Awards – For what 2013 musical film did Hugh Jackman receive his only Academy Award nomination? 5

This isn’t the correct movie from the previous question, but I still like it because it’s silly! Doesn’t Wolverine just look SO happy here? 🙂

Mystery – All answers will be words beginning and ending in the same three letters
1. Category denoted by the pink wedge in standard editions of Trivial Pursuit
2. Chemical compound found in beans, berries and prunes that some people believe helps fight disease
3. Word derived from Latin for “to twist,” which means a person inflicting mental or physical pain on another
4. Subterranean nickname of London subway
Missed #3, and it sounded like this one was a stumper for most teams.
Scores – 17 teams, scores 29 to 65, with Let’s Get It in first. I was tied with two other teams in ninth playing under the name “Bastard Squad.”
Category – Movie Remakes
Janet Gaynor, Judy Garland, and Barbra Streisand have all played the same title role in movies released in 1937, 1954, and 1976, respectively. Name the performer who will be playing that same role in a 2018 movie. 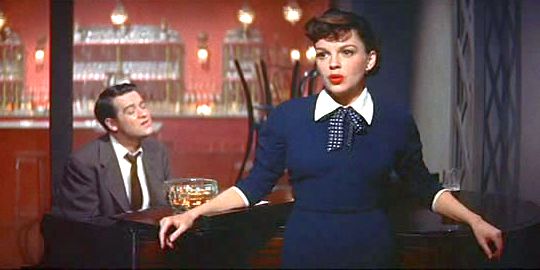 I’ve always felt kind of bad about what happened to her. Though the Hollywood machine chewed up a lot of stars and spit them out, I think Hollywood was particularly brutal to Judy Garland from a very, very young age…and oh my god what a VOICE she had!

Nope. Knew what movie that was/is, but not that it’s being rehashed again nor whom was going to be in this re-hashing. Wagered 20…was not present when final scores were read, so I didn’t write them down.
Game Two
1. Companies – What company, best known for producing food storage containers, trash cans and laundry baskets was founded in Worcester, OH and has its current headquarters in Atlanta? 10
2. U.S. Geography – How many U.S. states border both a Great Lake and an ocean? Considered the correct number, but wrote down a lesser one…miss for 4.
3. Boy Bands (should’ve just gone home when these categories announced, lol) – Name any one of the four 98 Degrees songs that hit the top 10 of the Billboard Hot 100. Name two for an extra “nerd” bonus point. I needed Kimberly for this question! I missed for 1.
4. NFL Players – Name two of the three Dallas Cowboy players nicknamed the “Triplets,” whom all played during the decade of the 1990s. Nope and nope…miss for 2.
5. Founders – What woman nicknamed “Angel of the Battlefield” founded the American Red Cross? 9
6. Authors – What American author wrote First To Die, Second Chance, Third Degree, and Fourth of July? Miss for 3.
7. Toys – What is the name for the humanoid Fisher Price figures introduced in 1959 that have sold more than 2 billion units – and were inducted into the National Toy Hall of Fame in 2010? 8
8. Actresses – What actress appeared in Silent Movie, Dracula – Dead And Loving It, and Blazing Saddles, all of which were directed by her husband? Note to nitpickers: uncredited roles are fair game here, and this was the Facebook clue. 7

What actress is this? And what character is she playing here?

9. Puppets – What TV show airing from 1989 to 1995 featured puppet characters including the title character, a dragon named Magellan and twins named Bog and Quagmire – who lived in a moat? This sounds like a kids’ show, and I would have been about 17 when this show first aired, which would explain why it was COMPLETELY OFF MY POP CULTURE RADAR – ERROR 404 – POP CULTURE REFERENCE NOT FOUND! This is a phrase I made up, but go ahead and use it when someone says something pop culture related that goes over your head! Miss for 5.
10. Puppets Part Deux – What word for puppets operated via strings from above comes from the French for “little little Mary?” Yay points…6.
Visual Mystery –

Got all of these.
Scores heading into the final: 13 teams, scores 20 to 53, with three teams tied for third, including Let’s Get It and Rummer, and one other one…I was right behind all of them with 48 points.
Final Category – Currency
Appearing on a half-dollar commemorating the anniversary of an important date in U.S. history, which 20th century president is the only president to have appeared on a coin during his lifetime?
I thought of another historic date for this one, but it wasn’t the correct one – so also not the correct president. I think this one was missed by all of the teams…did not write down final scores.
Our next game will be Monday at Powell’s Pub, for our last MTL game of the season, so next trivia recap Tuesday. As always, Go Pods, and stay classy, Lady MacBeth!