Please see the comments section for a bit more information…

Almost 29 years ago this week, my dad showed me a movie review in The Flint Journal that he insisted I read. It was for the movie Heathers, which was released in U.S. theaters March 31, 1989. It was released in Italy in 1988, which is why imdb lists the release date of the film as 1988.

“You’d probably like this movie,” my dad said to me. He knew I would like the movie on two levels – one because it was a dark comedy, and two, because…my name is Heather!

Unfortunately, the movie left local theaters pretty quickly, so I had to wait until it was released on VHS. When it was released on video, Dad picked up a rental copy at Valley Video, which was my town’s “local” video store. After I turned 18, I would rent an animated pornographic movie (from the adults-only “back room”)  there just to embarrass/horrify my friends (but that’s another blog topic entirely)! And no, it WASN’T Fritz the Cat!

Heathers was worth the wait! I loved it – the story, the dialogue, the characters… It really kind of spoke to me because I was the same age as the characters in the movie, and though my experiences in high school didn’t EXACTLY mirror those of the kids in the movie, there were similarities! This movie didn’t hold anything back – it had violence, profanity,  and countless instances of teen-age brutality/bullying. Suicide/alienation are both underlying themes of the film, which features murders that were staged to look like suicides.

From left to right – Christian Slater (J.D.), Kim Walker (Heather Chandler) and Winona Ryder (Veronica Sawyer). Heather had just collapsed/died after ingesting drain cleaner given to her by J.D. and Veronica.

Fast-forward about 29 years, and a “little bird” has tipped me off that a local theater group is staging a musical version of Heathers, of which a synopsis can be read here

After reading through this synopsis, I’ll have to admit…it sounds pretty good! The story sounds like it’s in keeping with the spirit of the original film (even expanding the character development/plot a bit), which is very, very important to me! Maybe I’ll have to give this a chance! I’ll have to find someone to see it with me, since musical theater ain’t exactly my husband’s bag, lol.

The Best quotes from Heathers (the movie):

Ram Sweeney): Oh, hell yes. I wanna set a Heather on my Johnson and just start spinnin’ her around like a goddamn pinwheel.

Rodney: Ok, now I rarely listen to Neanderthals like Kurt Kelly but he said that he and Ram had a nice little sword fight in your mouth last night.

Student: Did you hear? School’s canceled today cause Kurt & Ram killed themselves in a repressed, homosexual, suicide pact.

Kurt’s Dad: My son’s a homosexual, and I love him. I love my dead gay son.

J.D.: Wonder how he’d react if his son had a limp wrist with a pulse.

Heather Chandler: God, Veronica. My afterlife is so boring. I have to sing Kumbaya one more time…

J.D.: Yeah, but this is Ohio. I mean, if you don’t have a brewski in your hand you might as well be wearing a dress.

Heather Duke: Veronica, why are you pulling my dick?

Veronica Sawyer: Excuse me, I think I know Heather a little bit better than you do. If she were going to slit her wrists, the knife would be spotless.

Veronica Sawyer: Heather, why can’t you just be a friend? Why do you have to be such a mega-bitch?

Heather Duke: Because I can be.

Heather Chandler: They all want me as a friend or a fuck. I’m worshiped at Westerburg and I’m only a junior.

Heather Duke: [playing croquet] So what are you gonna do Heather? Take two shots or send me out?

Heather Chandler: Did you have a brain tumor for breakfast? First you ask if you can be red, knowing that I’m always red.

[puts her croquet ball against Heather’s and sends it flying]

Heather (Chandler) and Veronica at a frat party, where Heather threatens to have Veronica’s reputation for breakfast – after Veronica drinks too much – and pukes.

Heather Chandler: I brought you to a Remington party and what’s my thanks? It’s on a hallway carpet. I got paid in puke.

Veronica Sawyer: Lick it up, baby. Lick. It. Up. 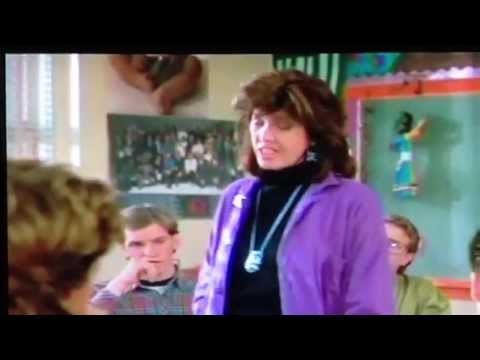 Pauline Fleming: Whether to kill yourself or not is one of the most important decisions a teenager can make.

J.D.: And your worst enemy.

Heather Chandler: Well, fuck me gently with a chainsaw. Do I look like Mother Teresa?

Veronica’s Dad: Will someone tell me why I smoke these damn things?

Veronica Sawyer: Because you’re an idiot.

One thought on “A “Heathers” Musical? F— Me Gently With a Chainsaw! Then Again, Maybe It Could Be… “Very.””