Eight people virtually “gathered” on a lovely Friday evening and put their heads together on set of trivia questions all about 1980s movies! We had a husband and wife sitting on their deck in Houghton, MI; a husband and wife sitting on their deck in Ypsilanti, MI; a Canton woman sitting in her kitchen (occasionally brandishing an adorable puppy), and another couple sitting in their Southgate home in metro Detroit. We were only one year off in our guess as to which year the movies The Mission, A Room With a View and Hannah and Her Sisters were released, and were stumped by an animated movies question…otherwise we did well! We finished in second overall.

Toward the end of the game, we were treated to some lovely sunset views:

Chicago-based host Samantha G. presented the questions, which are as follows:

1. Double Duty – What actress and singer starred in and performed the title song of the 1980 movie 9 to 5?

2. Clothing – What brand of underwear does Marty McFly wear in the 1985 movie Back to the Future?

4. Animated Movies – What 1982 animated film features Mia Farrow as the title character, Alan Arkin as Schmendrick, Jeff Bridges as Prince Lir and Angela Lansbury as Mommy Fortuna? Kim said her youngest daughter actually watched this movie recently! Sadly, none of us were “kiddie movie” watching age when this came out in theaters, so miss.

6. Soundtracks – What 1988 film includes the songs “Don’t Worry, Be Happy” and “Kokomo” on its soundtrack?

7. Villains – What is the name of the villain portrayed by Christopher Lloyd in the 1988 film Who Framed Roger Rabbit? Strangely, I never watched this movie all the way through, but I knew this, which made me some kind of folk hero for a few seconds!

8. Directors – In the 1980s, who directed or co-directed The Great Muppet Caper, The Dark Crystal and  Labyrinth? I was attending Girl Scout camp when the first of these movies came out in theaters, and my mom wrote in one of her letters to me at camp and said we should see this movie when I got back home (which we did). I don’t remember much about the movie, other than there was a baseball diamond or something in it???

9. Duos – What actor and actress star opposite each other in the 1984 film Swing Shift and the 1987 film Overboard? And thus began a conversation about terrible movie reboots (vis a vis the recent gender-swapped reboot of Overboard). 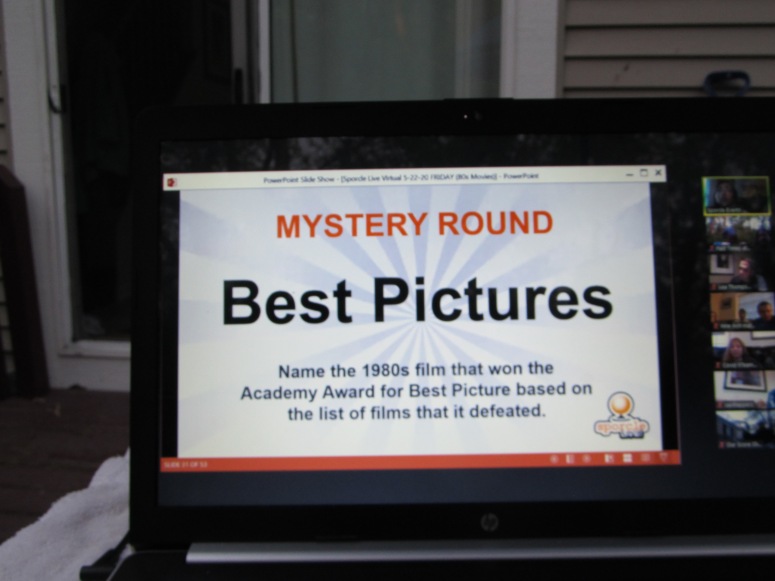 Name the 1980s film that won the Academy Award for Best Picture based on the list of films that it defeated.

M3 – Dead Poets Society, Field of Dreams, Born on the Fourth of July

M4 – Hannah and Her Sisters, The Mission, A Room with a View

Our next trivia adventure will be a geography themed game on Sunday evening. I’m not expecting too much, but it will be a chance for my “map guys” to stay sharp in their visual mapping skills!