T’was the night before Thanksgiving, and…a group of ‘Pods (and a “loaner” from a rival team) met for some pub trivia at Arbor Brewing Company Microbrewery (aka Corner Brewery).

Interestingly enough, Evan, a player from our own team unknowingly mimicked what a couple of players from the team More Beer Less Pants used to do years ago when they would play as a duo at the Corner Brewery – when he decided to get the liter sized mug of beer! Certain beers are available in liter sized mugs up until happy hour ends at 7 p.m. Even more interesting is that on that trivia night, we were “borrowing” another player from MBLP! So…it was like those two players who used to enjoy the liter sized mugs of beer from MBLP – were there in spirit. The MBLP player Phil who joined us as a “loaner” did not opt for the liter mug of beer, for the record! Also, Evan’s “big boy” mug of beer ALMOST lasted all the way through game one…

Pictures or it didn’t happen? 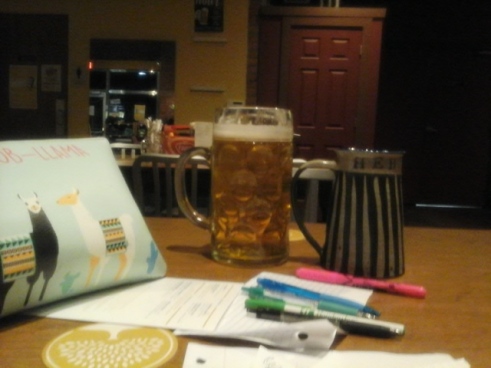 My mug of beer felt SO inadequate!

There were lighter crowds than usual on this “pre-holiday” night for the trivia games hosted by Sporcle with Tim – with only 10 teams (many with fewer players than normal) vying for prizes of $5 for third place, $10 for second place, and $20 for first place. We managed to win one first place/$20 gift card in game one, and a $10/second place prize in game two – both of those wins based on tiebreakers! We finished in second overall, only one point behind Don’t Forget to Strip Your Bartender.

Our “regular” Wednesday trivia night was called off, so we took that opportunity to re-visit this trivia spot of auld…one of the players from Your Resume Sucks thanked me after the game after I told him that we wouldn’t be competing against his team every week 😂 All joking aside, we normally don’t even TRY playing at this competitive trivia spot anymore unless we can summon at least five players (which we had on this trivia night).

Please assume the game questions you are about to read are abbreviated/abridged versions of the questions that were presented to players. Now that I’ve gotten this pesky disclaimer out of the way…

1. Tricks – At the beginning of A Charlie Brown Thanksgiving, Charlie Brown convinces himself that Lucy would never pull what particular trick on a national holiday?

2. Holidays – While American Thanksgiving falls on the fourth Thursday of November, what day of the week do Canadians celebrate their Thanksgiving? Not confident since we had no Canadians playing with us, but we got this for 4.

3. Borders – Turkey shares a land border with eight other countries, the longest of which is with what country on the Southern border? My “maps” guys Mike and Brad and our “loaner” were all over this immediately for 9.

4. Song of Thanks – What singer/songwriter released the 1998 song Thank You India?

5. Food Terms – What French word refers to the brown crust on top of a baked dish? Miss for 5.

6. Video Games – “Grade of Season” is the subtitle for which video game series? There was a lot more to this question, including a detailed description of the game, but…this is all I wrote down, got this for 7.

7. NFL Games – Other than the Detroit Lions and the Dallas Cowboys, name one of the two NFL teams that has won the most Thanksgiving games? Name both for a bonus point, got this for 6 plus the bonus point.

8. Movie Quotes – In which 1992 film does the title character say “Plymouth Rock landed on us?” Mike and Phil both all over this…

9. Slogans- What Kraft-Heinz product has used the slogan, “If It’s not (blank), it’s not Thanksgiving?” Miss for 1.

10. Pardons – Who was the first president to pardon a turkey, doing so to deflect questions about whether or not to pardon Oliver North? “Thank” the trivia gods for that Oliver North clue…

M1 – One half of the “Splash Brothers, along with Steph Curry 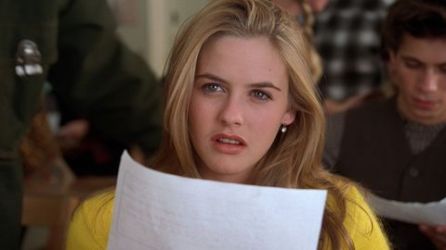 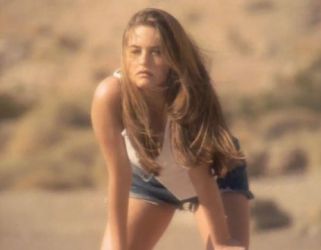 I couldn’t decide which picture to use for the person in #3, so I used…both!

Got all of these…”thank” goodness I managed to dig the answer for #3 out of my brain, with my only comment being, “I know she was a vegetarian.” Isn’t it nice when you’re not always “Clueless” on trivia nights (groan)?

Scores: Ten teams, lowest score below 40 and not read on the mic…to 61 with us and Don’t Forget to Strip Your Bartender tied for first.

As of 2016, the United States accounted for 41% of all global turkey meat consumption. What non-European country was second with 8.1%, ranking ahead of Germany, France, Italy, and Russia?

We were split on this one…a couple of us were heavily pushing for another North American country, I pushed for a heavily Jewish sovereign nation and there was some discussion for a country “south of the border.” One of these would wind up being correct (but wasn’t written down on the slip). No teams got it correct, so that put us in a tiebreaker for first with DFTSYP – we had to answer how many square miles encompasses the country of Turkey. Our guess was closest (though it really wasn’t THAT close), so we got first…

1. Confusion – What is the term for some plant species of the genus Dioscora that produce edible tubers that are often confused with the sweet potato? Both are gross, don’t eat either one just to be safe (LOL)…

2. Religion – Also known as “Pilgrims,” what other name was used to describe settlers because of their desire to remove themselves from the Catholic influence of the Church of England?

3. Guest Appearances – In an episode of Friends, what actor portrays Will, a former member of the “I Hate Rachel” club alongside Ross in high school, who attends a Thanksgiving party hosted by Monica? Apparently Evan is a nut for this show, so max points…

The correct guy for #3 is on the right…

4. Pie – Several U.S. states have an “official” state pie, but Illinois is the only state to have what pie as its official pie? There was some crude joking about it not being “Mary Todd Lincoln’s pie.” FB clue….

5. Golf – What golf statistic is abbreviated GIR? All of those years Evan said he watched golf on TV because of his daddy’s obsession with it paid off…

6. Dances – Audio clip of a 1962 Contours song mentioning a specific dance that shares its name with a popular Thanksgiving side dish.

7. Languages – What is the Spanish word for “corn?”

8. Spokespeople – In 2016, what Academy Award winning actor was named the creative director and celebrity spokesman for Wild Turkey whiskey? Since none of us remembered seeing these commercials, we just put in a guess for another actor (the one who won for the movie Crazy Heart). Miss…

The Dude ALWAYS abides, no matter what character he is playing! Here he is abiding in Kingsman: The Golden Circle.

9. Fruit – In 2017, Wisconsin produced 62 percent of the crops in the U.S. of what fruit, followed by Massachusetts, New Jersey, Oregon and Washington?

10. Movie Travel – What Midwest state is the destination of the two main characters in Planes, Trains and Automobiles? For a bonus point, give the first names of either of these characters, missed the bonus.

Mystery – What was served at the first Thanksgiving?

What four foods from this list were served at the first Thanksgiving in 1621 – lobster, potatoes, cabbage, tomatoes, eel, venison, cranberries

We got three of these correct.

We were in second out of 11 total teams with 60 heading into the final and were tied with the Whitmore Lake Wizards. DFTSYP was in first with 61 points.

At the 2019 Macy’s Thanksgiving Day Parade, what character will be dressed as an astronaut in honor of the 50th anniversary of the Apollo 11 Moon landing?

We got it, along with the team we were tied with, so…another tiebreaker. We had to ID the first year in which the term “Black Friday” was officially used. Our guess was closest, so we got second, DFTSYP held onto their lead and got first.

That’s it for our trivial pursuits for the week, we plan to be back at it next Wednesday at our “regular” trivia spot. As always, Go Pods, and stay classy, all of you crazy Thanksgiving and Black Friday shoppers! If you’re not classy on my watch, I will slap you (LOL)!