I’ve  been amused by a magazine cover headline for a few days now – and I’ve  been coming up with my own speculative  “answers” to the question  posed in the headline seen here (please  note that I haven’t  bothered  to read  the article since  that  could mean cluttering my brain with pointless  knowledge  about  the British royal  family – especially  drama stuff ):

Why Kate  and Meghan  Will Never  Be Friends: 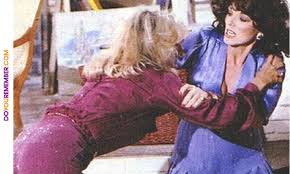 Krystle and Alexis’ fights were epic!